You May Die in the Desert – Bears in the Yukon 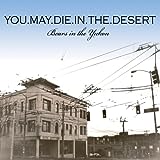 If you have been following my reviews of the releases on this label you can probably guess that this in an instrumental band. The Mylene Sheath must know about nearly every one of these type of bands out there because they sure seem to be scooping up the cream of the crop in this genre.

You May Die in the Desert started out as a two-piece with a drum machine but eventually added a real drummer to the band to help complete their sound. While they can be classified as a post-rock instrumental band, they also take some elements of math rock and standard indie rock and incorporate it into their sound. Each song as a really different feel to it than the one that came before it and the entire record doesn’t sound like one long song, but a collection of unique pieces.

There are a lot of tempo changes going on and their approach is far more subtle, you’d be hard pressed to find any really punchy power chords on this album. Instead you will find some intricate guitar noodling and a pretty meaty bass sound that lays a bed for the rhythm section without becoming overpowering. At times the music can be soothing and uplifting and at others it can be awakening. It seems evident that a lot of time was taken in the crafting of these songs and the result is seven tracks of pretty complex ear candy.

Oddly enough, this is the first CD release I’ve been sent from The Mylene Sheath and sadly they did no vinyl. This was originally released about a year ago on a Japanese label but it is finally available here in the States for the first time. Despite being released on the inferior CD format, this album is well worth picking up for anyone who enjoys this style of music.