When I was a teenage punk rocker in the 1980s, I was mostly into the North American punk rock but there were some UK bands that I loved. When I bought the P.E.A.C.E compilation, one of the many bands it turned me onto was the Subhumans. Their song “Rats” on that compilation made me want to check out their records back then and check them out I did. Every time I found another Subhumans record I would buy it, take it home, and fall in love with it.

When all the Subhumans LPs were released on CD years ago, the technology for mastering them wasn’t perfected or not a lot of care was taken with them and as a result by today’s standards they are pretty poor sounding CDs. Bluurg (the Subhumans own record label) and Southern Records finally decided to go back and re-master the entire Subhumans back catalog with the care and quality it deserves and also gave the packaging a much needed face lift. 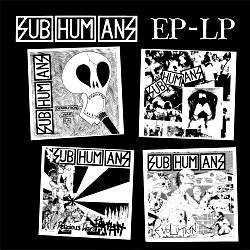 This album collects the first four 7″ EP’s the Subhumans released between 1981 – 1983. Each EP was great individually and collected together on one album makes it a full length punk rock masterpiece. If you’ve never heard the band before then start here and I can guarantee it you’ll become a fan after hearing such songs as “Society”, “Religious Wars”, “Love Is”, and “Evolution”.

Subhumans – The Day the Country Died

This was the band’s first proper full-length album that was originally released in 1982. The music is very similar to the EP’s which is mostly fast tempo yet still a bit melodic British punk rock. The songs are short and to the point and as a first album this was quite a solid release that totally stands the test of time (like all their material has). “Zyklon-B-Movie” is an all time classic punk rock song. 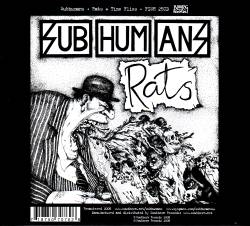 This CD collects the Time Flies But Aeroplanes Crash 12″ EP and the Rats 7″ EP released in 1983 and 1984 respectively. Time Flies had 8 songs, three of which were recorded live and the other five being new studio recordings. The studio songs are a mixed bag on the usual punk songs and a couple of them are slower, longer and more melodic, showing the world the band was capable of more than just short fast punk songs. Rats was a great follow up to this and the title track is one of the absolute best Subhumans songs ever and much like it was for me, a perfect sampling of everything the band had to offer.

Subhumans – From the Cradle to the Grave

This one gets my vote for best cover art and album title of the entire Subhumans catalog. It also helps that it also has some really great songs on there. This time around the songs started getting a little bit longer and they also started branching out and incorporating some different tempo changes in some of them. Originally released in 1983, the band went into some really uncharted territory for punk rock with the title track which clocked in at 16:53! The song is a pretty amazing piece of work too, it along with “Where’s the Freedom” and “Wake Up Screaming” totally warrant the price of purchase alone.

This was the band’s most musical effort and is without a doubt my favorite album in their catalog. The band started branching out with this recording and incorporated some reggae influence mixed in with their already great punk sound and the results in such songs as “Fade Away” and “British Disease” are spectacular. This was also the only Subhumans record to have any kind of color in the sleeve artwork! 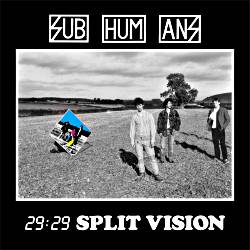 This was the last thing the band recorded before they broke up in 1985. This originally was released as a 12″ LP in 1986 and was a pretty solid send off for such a prolific band. Nine songs, mostly in the vein of stuff on From the Cradle to the Grave, but the last few songs seem like what was a natural progression from the sound on Worlds Apart and are a lot more diverse. It was sad that the band called it quits after this because they were a rare breed of band who were able to put out at least a record a year without sucking or getting boring or repetitive. What’s even more amazing is that they would finally record new material together 24 years later and sound every bit as good as they did when all these records were released!

All of these CD’s come in really nice digipaks with lyric booklets and a poster. The sound on these is vastly improved over the original CD pressings and worth the price of upgrading if you own the originals already. If you don’t own these already you should probably have your head examined as this was some of the finest UK punk rock the 1980s had to offer.