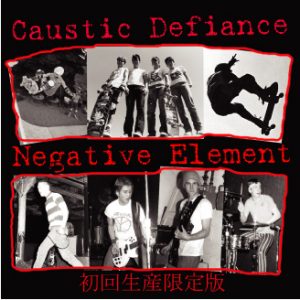 I am pretty sure that the Stepe brothers would have invented hardcore punk had they been born a few years earlier. At the very least they brought the world of punk rock to the Western Suburbs of Chicago in the early 1980s. Their band, Negative Element, I believe was one of the first and certainly the best early hardcore band in the Chicago Suburbs and their lone EP on Version Sound Records is one of my favorite punk rock records of all time. I actually played that record so much in high school that I kept a couple of spare copies on hand because I was sure to wear one out (and I actually pretty much did).

Caustic Defiance was the band the Stepe brothers formed after Negative Element broke up and they were forced to relocate to central IL in a farm town far removed from any sort of punk rock scene. Instead of throwing their hands up in the air and decide to start working the farm, the brothers brought punk rock to Peoria and put that town on the punk rock map. Unlike Negative Element, Caustic Defiance never put out any records, they simply recorded a bunch of songs as a demo tape that unfortunately mostly sat in a shoebox and didn’t really make the rounds, though if I recall correctly the band did get one of its songs onto a Mystic Records compilation.

Thankfully someone had the good sense to find that Stepe shoebox and want to preserve this little piece of Midwestern punk rock before it was lost forever. This CD compiles not only the Caustic Defiance recordings, but a bunch of Negative Element ones as well. The first 13 songs are comprised of the 1983 Caustic Defiance demo tape and that band was pretty much a straight up hardcore band typical for that period of time and could easily hold its own up against any of the “well known” bands of that time.

The remaining 14 tracks was what I was most excited for and that was the Negative Element tracks. They consist of their song from the Meathouse compilation tape, the original unreleased versions of the songs from the Yes We Have No Bananas EP as well as some other unreleased songs! The songs from the EP are more raw in these versions and sound really cool, especially the version of “Anti Pac-Man”. The last couple of songs are really rough sounding but were cool for the sake of documenting these unheard recordings. Negative Element had such a great mix of hardcore music and light hearted comedy along with some more serious topics such as religion and the police.The songs are short, fast, and catchy as hell and sound as good to these ears now as they did when I was a wide-eyed 13 year old boy who heard the EP for the first time.

The booklet contains liner notes with stories about both bands as well as the lyrics to nearly all the songs. It also contains some pretty good old photos and flier scans. It is like opening up a time capsule and seeing stuff from a quarter-century ago and the music as aged quite well. I’m quite happy that someone had the good sense to preserve and release this little piece of Midwestern hardcore history and anyone interested in 80s hardcore would be wise to pick this up while they can.

Order the CD from Interpunk