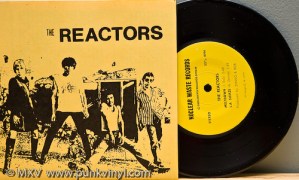 The Reactors were a relatively obscure punk rock back from the late 1970s  that resided in San Bernadino, CA. In their very short career they released this 7″ EP along with an LP on their own Nuclear Waste Records. They made very few of either and as a result only those with trust funds, well paying jobs, or people who were lucky enough to be around at the time likely have heard of them, let alone own either one of their records. They flew under my radar aside from seeing their records on various want lists of being hawked on ebay for enough money to pay a car payment with, hence my not owning a copy of either record.

Artifix Records, who have become some of the finest archeologists of punk rock, have once again done the world of punk rock a huge service by reissuing this 7″ so people on a budget and those who just want to hear some great punk rock they  missed the first time out can do so for the price of a fast food lunch!

What we have here is the original five song EP pressed from the original master tapes inside of a faithfully reproduced sleeve and labels. Not only did they do that, but they reproduced both variations of the picture sleeve and you can choose which one you want! The only difference in the packaging is the addition/replacement of the record label information. The labels and sleeve look nearly identical to the originals based on the photos I’ve seen of them. Ites packaging is perfect for being an old punk 7″.

The music is garagey late 1970s punk. It’s raw, mid to fast tempo with female vocals. The songs are only a couple minutes in length each as it should be and the guitar at times has a little bit of a surf twang to it. This is exactly the kind of punk rock I grew up on and had they stuck around or made more copies of their record, I truly believe that this band would have been more of a staple of punk early punk rock and in more peoples’ collections.

Artifix really struck gold on the mining expedition that they dug this up on, anyone with a turntable who is a fan of early punk rock needs to own this record, not just for the great music but to also encourage the label to keep scouring the globe and bringing the world such great punk relics for cheap prices!