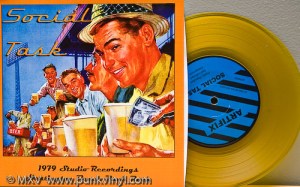 Orange County, CA in the early days of hardcore had a talent pool unlike any other scene that spawned some of the most legendary and influential hardcore bands of all time, some of whom are still around to this day in one form or another. I don’t know what it was about that particular place in the country but a whole lot of magic came out of there and there hasn’t been anything like it since.

One of the earliest OC punk bands, Social Task, dates way back to 1979. You never heard of them? That’s because until now they never put out a record! The band featured Scott Sisunik who was the original singer and a founding member of China White. The music is early hardcore that bands like China White, Adolescents, and countless others made famous and for good reason, this blend of somewhat melodic hardcore was the bees knees back in the day and still stands up today against any of the modern day bands calling themselves punk rock or hardcore. It is classic and essential stuff.

So why didn’t the band release anything back then? Well they didn’t last past 1981 so their career was very short lived. Back in 1979 then went into a studio and recorded five songs that never got released. The band somehow forgot about these recordings after they broke up. How a band spends time to record songs and forgets about them is a mystery to me but that’s the story. 28 years later the band found out that the place they recorded those songs at not only still was in business, but they still had the original tape the band left behind! Artifix Records came to the rescue and had the tape baked and transferred and finally righted the wrong of Social Task never having a record out by pressing the songs on this 7″, but that’s not all.

When this project got under way in 2007, 3/4 of the original band along with a new drummer recorded three new songs to put on the flip side of this EP! I’m happy to report that nearly three decades has been kind because these songs sound like they easily could have been the follow up recording to the original five song recording and if you told me they were done in 1980 I’d have believed you! Not too many bands can take three decades off and still pick up right where they left off and sound as good and not dated, but Social Task pulled it off.

This 7″ slab of wax is pressed on yellow vinyl and comes housed in a color 3/4 fold-over sleeve similar to the old Dangerhouse Records 7″s. It comes with a two sided insert with one side containing all the lyrics and the other side containing a nice history of the band. The whole package was nicely done and the music on it is wonderful and is yet another great punk artifact that is worthy of any old punk’s record collection.