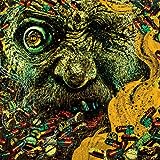 When I was a whole lot younger back in the early 1990s, I was in the Pushead fan club which was something that turned me onto some really cool bands I had never heard of before with 16 being the best of the bunch. The band did a small handful of 7″s for Pushead and his label, Bacteria Sour, as well as releasing their first full length album with him (on CD and 10″ vinyl). The problem was that Pushead’s label was pretty underground at that point, more than his first one was anyway and as a result not as many people got to hear the band 16 than should have, at least in the US, Bacteria Sour was big in Japan which got 16 a tour over there back in the day.

Most of 16’s music has been out of print for the better part of a decade but since the band reunited last year and released a new album, their current label, Relapse Records, had the good sense to reissue the band’s first two albums on CD, with Curves That Kick being their first one.

The music is a sort of sludgy metal with some post-hardcore elements in the song structures. The songs are pretty fast tempo, but not that of speed metal. The guitars are thick and occasionally a little clangy with a prominent low end holding the whole thing together. This ear pleasing and powerful foundation is topped off by fuzzed out vocals which play with the guitar sounds nicely, as if the two were brothers. The album contains 12 songs and there’s not a bad one in the bunch. You will likely find yourself always playing the album in full instead of skipping songs.

The album has been remastered and it sounds cleaner and heavier than the original, you can notice the difference right away especially in the low end. The cover art has been totally replaced too with them removing the original Pushead art and in its place is something that looks a lot more like the artwork of their most recent album. I have no idea why they decided to remove the Pushead artwork as he has a lot of fans, but this new cover is pretty cool too. It’s great to see such a good band get a second chance with the reissue of this record along with the band reuniting. Here’s hoping to more 16 in the future.