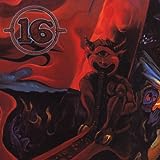 16’s second album was recorded in 1994 but it didn’t come out until 1996 on Pessimiser/Theologian records which was home to the band after their stint on Pushead’s label, Bacteria Sour. The album was a solid follow up to their first and in some ways surpassed it. It was originally released on CD and LP (which came on clear vinyl with an additional 7″ inside in the initial pressing). Because of the long delay in its release, a couple of the songs from this album first appeared on very limited edition 7″s on Bacteria Sour Records that very few people likely own due to how few were pressed and that some were only available to the Pushead Fan Club.

On Drop Out the band got heavier, increasing the low end a bit and just adding a lot more punch to their sound. The songs range in tempo too with many of them being a bit slower and more deliberate with really catchy yet very heavy grooves. Some songs retain the fuzzy/distorted effects found on their first album, but quite a few of them ditch that effect for a dryer and raspier natural vocal. The newer vocal style sounds great with the heavy music and my favorite songs on this album feature this newer vocal style.

The overall result was that Drop Out was a great successor to Curves That Kick and in some ways even surpassed it and the pair of albums are really worth owning for any fans of heavy and aggressive music. Much like the first album, this album was remastered and while the improvement of sound quality isn’t as drastic, it is still a bit of a step up and it’s great that this album is finally available again on a much larger scale.

Order the CD from amazon