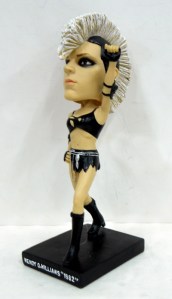 The latest in the line of throbblehead toys will be coming out this summer. The latest is of the “metal priestess” and punk rock icon, Wendy O. Williams. Wendy was most famous for being the frontwoman of The Plasmatics, plus she was the main heel in the B-Movie, Reform School Girls, which believe it or not has never been released on DVD!

The official press release for the figure is as follows:

The figure captures Wendy’s incredible 1982 look, stands at 7 inches tall, and is made of a lightweight polyresin. Displayed in a tri-windowed box, here she is accurately sculpted right down to the platinum blonde mohawk, spiked arm bands, and tattered threads.

The throbblehead figure will be distributed by MVD Entertainment Group – a company specializing in music-related distribution since 1986 – and DKE Toys – a wholesale distributor of urban / vinyl / designer art / objects / toys / figurines.

Wendy is the sixth punk personality to be polyresinated by Aggronautix. In May of 2009, the company launched with a highly popular GG Allin “1991” figure, which was limited to 2000 numbered units. That figure has since sold out…

Want one to put on your mantle? You can pre-order yourself one here.