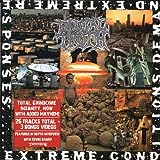 Tomorrow Earache Records will be reissuing Brutal Truth‘s Extreme Conditions Demand Extreme Responses on CD. This isn’t just a straight up reissue but a deluxe expanded edition. Her’s the skinny from the label.

and immediately raised the bar for grindcore with its intensity and aggressiveness. This newly reissued redux version features the original 15-track album along with 11 bonus tracks, including songs from the much-sought after Ill Neglect 7″, the long deleted Perpetual Conversion EP and four unreleased S.O.B. covers. Also included are three bonus music videos, including “Collateral Damage”, cited in the Guinness Book of Records as the world’s shortest promo video. Brand new liner notes also include a brand new interview with Brutal Truth vocalist Kevin Sharp.

As mentioned this deluxe album comes out tomorrow and you can get it either from the Earache Records webstore or Amazon.com, plus better record stores should probably have it as well.