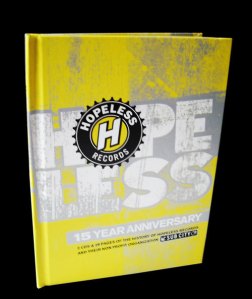 It’s hard to believe Hopeless Records has been around for 15 years. It seems like just a few years ago they were a fairly new label sending their releases for review in my zine, Spontaneous Combustion, but since I stopped doing that zine almost 12 years ago now, I guess it really has been 15 since the label founded. I’m not sure I needed such a reminder of how rapidly I’m aging though in the last 15 years the label has aged gracefully and become hugely successful.

The label was started almost as a dare by Louis Posen when his friends in Guttermouth were looking for someone to release a 7″ for them. This sparked something inside Louis and soon after that record’s release, he started putting out records by other bands he liked and soon found himself setting up a small office in the back of the building his father worked at. He had a good ear for music, especially of the pop-punk variety and released some cool records by bands like Samiam, Fifteen, 88 Fingers Louie, Mustard Plug, Dillinger Four, The Queers, and countless others. Nearly every release on the label did well and the label started putting out video and CD compilations too which were a lot of fun. The label was really developing a good track record of quality and soon the label started a second imprint, Sub City, which saw the label getting involved in charitable causes in an effort to find cures for diseases and to make the world a better place. I can’t even think of another record company off the top of my head that does such a thing with any regularity, let alone making it one of its business plans.

In the past few years the label’s popularity has soared to new heights with a handful of their artists becoming huge, signing to major labels, and selling tons of records. Bands like Avenged Sevenfold and All Time Low, among others, are all enjoying huge success with some of them playing Warped Tour the past few years and being one of the bigger draws at the festival.

To celebrate this big milestone birthday the label has released this limited edition book/CD package to showcase the label from start to present and give a look into the history behind the label and the people who run it. The two CDs inside contain a song from each band featured and spans the entire history of the label from Guttermouth to All Time Low and everything in between. The two discs are housed in a 29 page full color hardcover book which tells the story of Hopeless Records and is a fascinating read. Aside from the story, there’s a history and photos of each band on the compilation and a few pages of quotes from people in the music industry singing praises for the label. The label has a lot to be proud of and it really shows in the packaging for this release.

It’s great to see a label that actually seems to care about people have such a long and successful run with no signs of letting up. This package is worth not only picking up for the variety of music contained on the discs, but for the story contained inside the book as it’s one of the rare feel-good stories that will make you hopeful that the music industry isn’t all bad.