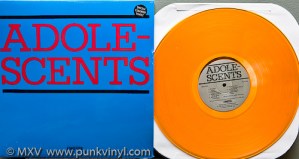 The Adolescents first LP, commonly referred to as the “blue album” is one of those rare “perfect albums” in which every song on it is a classic. This is one of those albums that is an amazing listen from start to finish and one that you will likely never skip songs while playing it on an inferior medium like the compact disc.

As far as punk bands go the Adolescents are legendary and their two releases on Frontier Records are records that anyone calling themselves a punk rock fan would be embarrassed to be without. The record has been pressed on a number of different colors of vinyl in the past in varying degrees of limitedness and now is presented on another new color.

This time out it is pressed on translucent orange vinyl. It kinds of looks like an orange Jolly Rancher. This vitamin C enhanced platter is available now for a limited time direct from Frontier Records. The record comes with a nice lyric insert as well and the songs sound as good today as they did over a quarter century ago when this record was initially released. Every time I receive one of these in the mail it puts a smile on my face and gives me another reason to put it on the turntable. Want one for your own collection? If so head over to the Frontier Records website and load up while you still can.