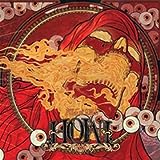 Howl has been around since 2006 but this is their first full-length album after releasing an EP last year on Relapse Records. That release had only three songs and was but a taste of what the band had to offer, now with this full length we see what the band is really capable of.

Full of Hell features nine songs of intense doom metal.  The guitars are tuned low and are super heavy as they chug along driving the songs. The drums are as pummeling as the guitars including spots of double kick drum in certain songs. The bass is super low and rumbling and the vocals are growled like a rabid dog, reminiscent of early  Mastodon at times. In fact this album reminds me a bit of some early Mastodon in a slower way and I predict that in the near future people will be paying big money for vinyl copies of this album as they do for those early Mastodon records on colored vinyl.

All nine songs are heavier than a lot of bands you have probably heard and songs like, “The Scorpion’s Last Sting” have enough unique parts and tempo changes to make it a near epic in itself. I made reference to Mastodon before and I will go on record saying that these guys are on track to become a big band like they are in the next couple years, if not sooner.

Aside from the crushing music contained on this disc, even the cover art is spectacular and I bet looks even better on the vinyl version that I’m going to have to get myself a copy of while they are still available. This album so far is an early candidate for album  of the year for me and is a band I am going to have to see live sooner rather than later. I give this my highest recommendation for any fans of doom metal or heavy music in general.