Geoffrey Oi!Cott – I Was Monty’s Double 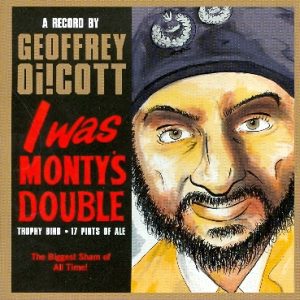 Geoffrey Oi!cott is a band from Leeds, UK that I believe has been around for at least four years. From what I can tell this may be  their first 7″ and since then they have also recently released an LP.

This 7″ features two original songs and one cover song. The original songs are your standard fare UK Oi/street punk. It’s mid-tempo sing along type of stuff that reminds me of the UK bands of the early 1980s so much so that I had to check to make sure this wasn’t some reissue of a UK band I missed almost 30 years ago. The music is pretty upbeat and catchy and it will make you want to down some beers with your friends and run bounce into each other. I can see this being a huge hit with anyone into early UK punk.

The third and final song on this 7″ is a cover of the Partisans’, “17 Pints of Ale” which while unnecessary, sure sounds a hell of a lot like their own material so it’s pretty obvious where the band takes their influence from. As far as cover songs go it’s inoffensive, though I’d rather have that space used with a song of their own instead.

The record comes in a full color glued-pocket sleeve and is on black vinyl. It comes with a lyric sheet and even has a download code for the mp3s of the record which is a really nice touch. Any fans of street punk, oi, and old UK punk will likely find this single worth checking out.