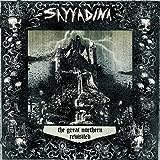 Sayyadina is a grindcore band from Sweden that has been around for ten years now, though this is the first time I’ve heard them. The band has put out two albums plus a slew of singles and compilation appearances.

The Great Northern Revisited collects all their singles and compilation appearances onto one CD that contains 30 tracks. The music is hyper fast with insanely fast spastic drumming, clangy bass, and thrashing guitars. It is super aggressive and powerful and the band barely pauses for air. The songs are also fairly short too which is good because this style of music doesn’t lend itself well to long song lengths.

As the disc progresses some of the songs have cool tempo changes and also feature two styles of vocals: the more common higher pitched shrieking, and some low growls. The two play well off each other and I’d guess the songs with the variety in tempo are probably the newer songs as the band got more comfortable and started to find their niche.

Grindcore in general comes off best in short doses so a disc of 30 tracks may feel a bit lengthy, but taken in smaller doses results in a fun listen. Having never heard this band before this, I found this disc to be an excellent starting point and now am curious to hear what their two albums sound like.