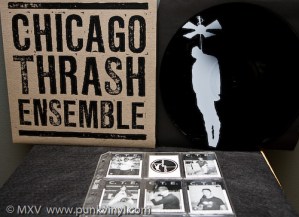 Chicago Thrash Ensemble is a thrash band that has been playing around for a few years now but aside from a demo tape, this is their first real release and they are showing up to the party in style.

As you could probably surmise from the name, Chicago Thrash Ensemble are a thrash/metal band. Their roots are in thrash and they have metal tinged guitar which hearkens back to the mid to late 1980s when thrash metal was becoming popular, except this band is a hell of a lot faster.  The metal influence comes more in the guitar tuning than anything else. This band features members from other local bands such as Authority Abuse and Hewhocorrupts so that may give you a hint of what style of music these guys are playing.

The pace of most songs is very fast, but songs have some tempo changes and in fact it is those songs that really shine. The biggest standout is, “Mine to Win, Mine to Lose” which is mostly fast thrash but then breaks into a slower and heavier break that is instantly catchy. Hopefully they will experiment like that more in the future because if that’s a sign of things to come, this band is on the path to great things.

The vocals are yelled and screamed with a mid to higher pitched sound. The singer is probably tearing the shit out of his throat but that damage isn’t for nothing as the vocals sound great and are a perfect match to the heavy and fast music he’s screaming over. This EP has seven songs on it and they are all fairly short and to the point so the record is over before you know it and it does leave you wanting more.

The icing on the cake is the packaging of this record. The EP is on a black vinyl 12″ that has all the music on one side and the other side is screen printed with an image of a guy hanging from a ceiling fan. This record is housed in a fold-over chipboard sleeve that is also screen printed with the artwork and song titles on it. In lieu of a regular insert is a set of baseball cards that features each band member (complete with stats on the back of what bands they were in and when!), as well as the label info and liner notes. They are housed in a mylar baseball card sleeve that you’d find in a binder. The packaging is pretty clever and unique and really makes the record feel a lot more special. The record is being sold for a completely reasonable price, in fact the price is low by today’s standards considering what other labels are charging for their releases these days, making purchasing this an easy decision for anyone into thrash.