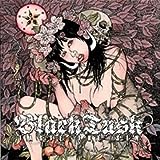 There must be something in the water down in Georgia because that state has been responsible for a lot of really good metal bands including Kylesa, Baroness, Mastodon, and now Black Tusk. The band has been around for about five years and has a couple releases under their belt with Taste the Sin being their debut for Relapse Records. Since Relapse is/was a home to a couple of the bands I mentioned from their area, it seems like a natural fit for Black Tusk to find themselves a new home with them.

Black Tusk are a sludgy metal band with hardcore and thrash elements as well. They have a big, thick, dense sound and are very riff heavy and mostly fast tempo. They have two different singers much like the way Kylesa does, except Black Tusk’s are both male. In fact the band reminds me a lot of Kylesa and I think it is a safe bet that the band draw a huge influence from them. The music is very powerful and while they definitely have a sludgy side to them, the band leans way more to the metal/thrash side of the fence with a Southern twist that can only be found below the Mason-Dixon line.

The album is quite solid and any Kylesa fan especially, or fans of the other GA metal bands mentioned in this review will likely find much to enjoy about Black Tusk. The cover art was done by the same guy who does the covers for Baroness and I can easily see that guy becoming the next Pushead as far as popularity goes in cover artists as his stuff is very cool and highly detailed. The label even had the good sense to release this on vinyl which I’m sure looks stunning. A solid effort from a band that will likely start building up a bigger following based on this album and a bunch of touring.

Sludge filled Southern style metal with some hardcore and thrash sprinkling as only the bands in GA can deliver.

Order the vinyl from Relapse Records