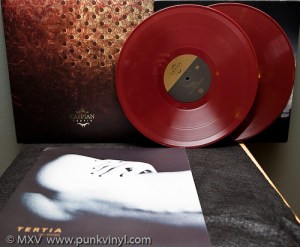 After a couple of years away from the studio and also acquiring a couple additional members, Caspian has returned with a follow-up to their two releases on The Mylene Sheath, which consisted of an EP and a full-length album, both of which were pretty spectacular.

Tertia sounds like the logical next step for an already solid band. They don’t mess with the formula too much, they just expand on it. Caspian is a post-rock instrumental band that instead of going heavy on the riffing go heavy on the layers of sound and ambiance.

It is the layers of sound that come off even more complex and full than on the two records prior to this one. The band added a couple of additional members recently and I believe that is one of the reasons why Tertia sounds so much more full. Most of the songs are equal parts hypnotic, atmospheric, moody, and intricate. The multi-layered guitars weave in and out creating a dense blanket of sound that is kept in line by a rock-solid rhythm section. Each song is an exhilarating experience to listen to and the album as a whole creates a variety of moods depending on what’s going on at the time. Each song is a very detailed work of art and there’s a lot of awe-inspiring moments in most of the songs.

Keeping with the label’s tradition of beautiful packaging, this one is certainly no slouch. The album is split over two 45 rpm 12″ colored vinyl records (both of them maroon which was an edition of 700) that come in a standard jacket with a varnish gloss and foil stamping. The records are housed inside thick printed inner sleeves and there is also a thick booklet full of beautiful photographs! And the icing on the cake is this comes with a code to download the mp3’s of the album too for your iPod! The packaging alone is well worth the price of ownership, but it’s the music that really matters, and trust me when I say that Tertia matters! A beautiful package inside and out for both the eyes and ears.

One of the most complex and layered post-rock instrumental bands around deliver a tremendous new effort.