Junius – The Martyrdom of a Catastrophist 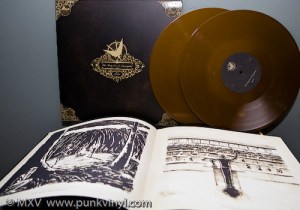 Junius – The Martyrdom of a Catastrophist LP
The Mylene Sheath

This album is the third release for Boston natives, Junius, though it is their first full-length. The band has been around since 2004 and previously released a pair of EP’s.

The Martyrdom of a Catastrophist took the band a couple of years to complete and is inspired by the writings of Immanuel Velikovsky.

Junius are like some sort of magical blend between post-rock instrumental bands, heavier complex bands like Neurosis but stripped of the metal influence, with quality alternative rock like The Cure thrown in for good measure. The music is incredibly complex with multiple layers and textures that make an epic landscape of sound. It is impossible to pigeonhole them into any one category and the sheer diversity of the musical influences they wove together is beyond impressive.

The vocals are incredibly melodic and almost soft-spoken at times and there’s the occasional sample or two in the intros a couple of the songs on here. It was the logical choice for a vocal style as any kind of yelling would never have fit with the melodic textured music Junius composes. They also use piano which gives an added sense of beauty to the songs that incorporate it like, “(Turning to the Spirits of the Hours)”. I have no idea where this label digs up such amazing bands but they seem to have discovered a secret reservoir of greatness that they keep tapping into. Every time I hear a release on this label I think “that’s it, they can’t top themselves again” and yet they do, every time!

As beautiful as the music is on this album, the packaging gives it a run for its money. The album is pressed on two colored vinyl (in this case, gold) 12″ discs that play at 45 rpm. They discs are housed in a glossy coated standard jacket and the artwork looks like a book from the old days. The album also comes with a 12″ x 12″ book that features drawings to go with every song that are done in the style of old books, as well as the lyrics and liner notes. The book itself had to cost a lot of money to make, let alone the rest of the quality packaging. The mastering job was stellar and the album sounds incredible on the vinyl format. You could never have pulled off this packaging and warm sound on a CD.

If there was still a 120 Minutes on MTV, this band would be one of the featured acts and I fully predict this album puts them on the map for a lot of people who enjoy quality diverse music with an edge. Dare I say I don’t know how The Mylene Sheath is going to top this one?

Junius – The Martydom of a Catastrophist

Incredibly complex and melodic music that defies description housed in a package as beautiful as the sounds coming from the grooves.