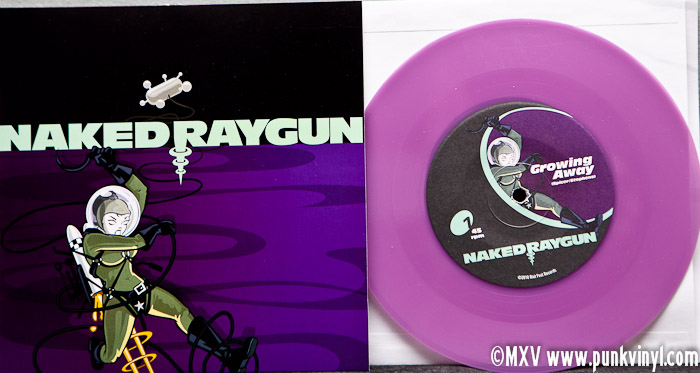 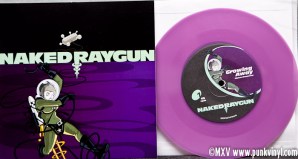 Naked Raygun return with the second installment of their 7″ series. Just like the first one, this features two brand new studio songs.

“Growing Away” is the catchiest Raygun track yet of their new material. It has  Buzzcocks influenced guitar with a bit of a surf twist and the song is a pretty straight-forward poppy number. The sing-along chorus is super infectious and the song was stuck in my head for hours after just one play. This song is easily the best one out of anything on these first two singles and stands up against anything they did post-Jettison, certainly eclipsing anything they did on their last studio LP.

“Just For Me” follows the more traditional Naked Raygun formula and sounds like it could easily have been on the Understand LP. It’s a mid-tempo rocker that is also quite catchy despite its lack of the sing-along parts. It is a pretty solid Raygun tune and any fan of the Understand era of the band will probably take a liking to this song.

The record comes in a nice pocket sleeve with full color printing and the record is pressed on purple vinyl. There also exists a black vinyl version. Sadly unlike the first single in this series, this one does not come with a download card to get the MP3s for free which was unfortunate for those hoping to fill their iPod. There was no lyric sheet either but the vocals are very easy to understand in both songs and you’ll find yourself remembering the lyrics rather quickly to both songs after only a couple of listens as it’s likely both of these songs will get stuck in your brain quite often. The artwork compliments the first single perfectly and the two look great together in a record collection.

Naked Raygun really delivered the goods on this installment of the 7″ series, and I hope the next one is as strong as this one was. Any fan of the band will definitely want this new single and will be happy to know the band hasn’t lost it yet.

Two super catchy songs that will get stuck in your head for days housed in a handsome looking package.