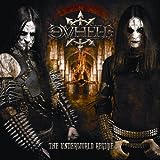 Ov Hell is a Norwegian black metal band that recently formed that is made up of members of Gogoroth and Dimmu Borgir and also features work from members of 1349 and Enslaved. With this combination of big name black metal talent, you would think that the results of this super group of dark minions uniting would be a powerful force, and you would be correct.

The music on The Underworld Regime consists of rapid-fire drumming with dual kick drums leading the beat. On top of this rest fast layered guitars that have a slight clang to the leads. The guitar sound is actually quite reminiscent of Emperor on their Anthems to the Welkin at Dusk album.

The music is fast tempo most of the time but there are breaks and tempo changes. When things slow down a bit it gets especially interesting and actually sounds more powerful and evil. The vocals are growled and slightly high-pitched and have an almost processed machine like quality at times which makes them sound like they came from the deepest gutters of hell. As far as black metal vocals go these are top-notch.

Aside from the solid playing and song structures on here one other thing really stood out and that was the production. Most black metal albums have this real muddy sound quality to them and while that is usually by design I always thought it did the bands a disservice and that with better production values their records would be even more intense. Ov Hell’s debut puts that theory to a test and confirms my suspicions. Finally a black metal record that not only kicks a lot of ass musically but aurally as well!

Fans of black metal would do quite well to pick up a copy of this album as Ov Hell really do live up to the task of being a black metal super-group and hopefully this sets a new standard for the production in black metal recordings.

A black metal super-group that not only delivers the goods musically but sets a standard for production values.