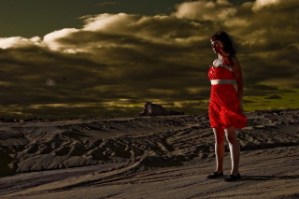 File this under “I can’t wait!”, Julie Christmas, female vocalist extraordinare, is going to be releasing her first solo record this fall. The album will be titled, The Bad Wife and a song from it will be featured in the upcoming movie, Wrong Turn at Tahoe.

“I use sounds to express feelings and ideas that I am too clumsy to get across with words alone,” explains Christmas.  “Working with amazing visual artists – people who speak in images – gets me one step closer to really communicating with anyone nuts enough to listen.”

Currently, Christmas is collaborating with Nix Turner, renowned illustrator of worldwide counterculture icon, Emily the Strange, to create a book titled The Scribbles and Scrapes of Amy Anyone: (A Multiple Personality Autobiography).  Christmas wrote the story and is working on music for the release of an accompanying CD, which features a tone signaling the reader to turn the page.

Her vocal work in the band Battle of Mice is one of the most amazing vocal performances ever put down on tape and their sole album stands as my favorite modern record since its release a few years ago.