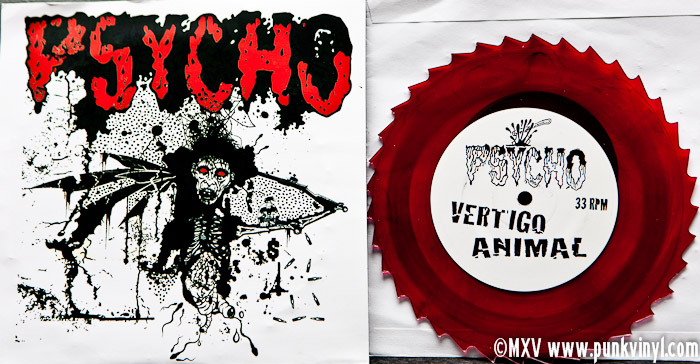 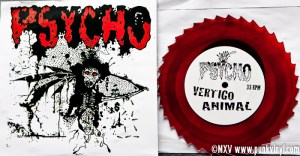 Psycho is a hardcore band from the Boston area that dates way back to the early 1980s and in fact until this arrived in my mailbox I had no idea they were still around! You old-timers may remember that this band features Charlie Infection on drums who also did time in Cancerous Growth and ran Ax/ction records.

I believe they have a different singer on this release than on the last one I heard from them (which was probably 20 years ago now!), but Psycho’s sound has remained amazingly consistent in a comforting way. Psycho play rather speedy hardcore with a thick and almost muddy sound. They have always been a very heavy band without any metal and this EP is no exception to that rule. The four songs (three originals and one GG Allin cover) are fast, heavy, and energetic walls of sound with angry and aggressive vocals laid on top.  The songs sound like they easily could have been recorded back in the band’s heyday which is an asset as Psycho was always a very good but very underrated band that deserved a lot more recognition than they received.

The record itself is die-cut into a saw blade which is actually pretty sharp and looks very cool. It is a limited edition of 500 with only 150 of them coming on blood-red vinyl (the rest are black). The record is housed in a fold-over sleeve with lyrics and info printed on the inside. It is an old school package suitable for an old school band with the cool gimmick of the saw blade vinyl making for a nice package overall.

Fans of old school, no-nonsense hardcore would find this EP to their liking as well as anyone old enough to have enjoyed Psycho “back in the day” such as myself. Time has been kind to these hardcore veterans and it is great to see they are still at it.

Hardcore veterans return with a four song EP that is true to their roots, proving they still have it.