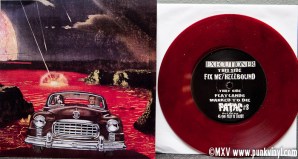 Executioner was a band for the first generation of San Jose, CA hardcore back in the very early 1980s. They were very short-lived but from everything I’ve read, they made quite an impact at the time, especially for a band who didn’t put out any records. They had recorded a full album’s worth of material but for some reason none of it was ever released aside from people who had a tape of it and passed it around the world countless times. Patac Records struck gold with finding out that the material had survived and after 28 years Executioner finally has a record out.

The music of Executioner is classic early hardcore. The songs are hard, fast, heavy and short. Hundreds of bands copied this style in the years to come but this band was at the first part of the curve. There’s a small bit of British punk influence in the sound and the very tiniest hint of metal in the guitars that only just makes the sound heavier, and isn’t remotely reminiscent of the metal that would infect hardcore three years later. The vocals are yelled and the singer has a great harsh, throat full of gravel vocal sound that was perfect for this style of hardcore. Had this record come out in this form 28 years ago I could guarantee you it would have been pretty influential and people would be paying big money for them on eBay these days along with their early Dischord and Touch and Go singles.

When you listen to this record and put it in the context of when it was recorded, it is a prime piece of hardcore that is a must have for any fan of the genre. As an old punk rocker who grew up on this stuff, I can tell you had this come out when I was a teenager it would have been one of the many soundtracks of my skateboarding and hardcore youth.

The record was pressed on red vinyl and contains four songs. It is housed in a full color fold-over sleeve that is also printed on the inside in two colors with the lyrics and photos. It also contains an old show flyer that has liner notes and stories about the band printed on the opposite side. It’s really a nice package which makes this punk rock artifact all the more worth owning. This is truly a must for fans of old hardcore and punk historians.

A recently unearthed early hardcore artifact that any fan of early punk should be thankful for.