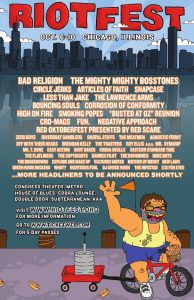 The Riot Fest people just upped the ante in a big way for this year’s festivities with the release of some new details and the addition of some fine bands.

First let’s get to the new bands added to the fest: Cap’n Jazz, Pennywise, The Bronx, Jello Biafra and the Guantanamo School of Medicine, Torche, and Kylesa. Those last two additions made my day and hopefully they’ll be on a bill that doesn’t conflict with one of the other Riot Fest shows that I’ll be attending.

Now let’s get to some important old-school punk details and by that I mean the Busted at Oz reunion. The men behind this Chicago punk blueprint have organized a benefit show at the Double Door (please note new venue) on October 6th. Fans will see the early Naked Raygun line-up (Jeff Pezzati, Santiago Durango, Camilo Gonzales, Jim Caleo), The Effigies (John Kezdy, Earl Letiecq, Paul Zamost, Steve Economou), The Subverts (original lineup), Steve Bjorklund (playing Strike Under songs), Da! (original lineup), Silver Abuse (original lineup) and Toothpaste (original lineup). Proceeds go to benefit the Chicago Coalition for the Homeless. The only bummer about this news is that they moved the show to the Double Door (it was originally supposed to be at Metro which is a far superior club to the Double Door). Despite the massive downgrade in venue, this is the show I’m most excited about at this year’s fest.

Additional details and ticket information can be found at the Riot Fest website.