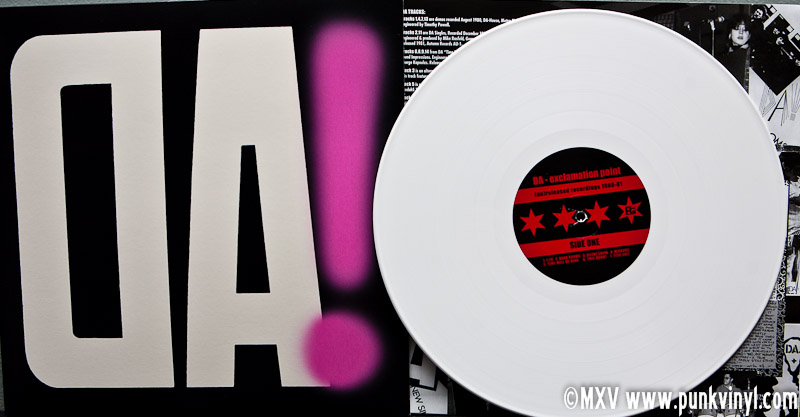 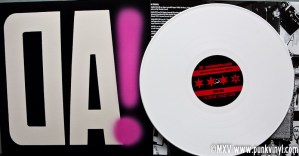 Despite their inclusion on the classic Busted at Oz compilation,  DA! were one of the most overlooked bands from the first wave of the Chicago punk scene. They somewhat quietly released a 7″ and a 12″ EP on Autumn Records and then were never heard from again. The band started with three females and one male, but then the original drummer was replaced and a balance of the genders occurred with their replacement drummer.

DA! played this quirky, arty,  dark wave music that had more in common with Siouxsie and the Banshees and Joy Division than they did any of their Oz compadres. Their songs are mid-tempo with sort of dark and gloomy overtones. They have a real interesting and unique dual guitar sound which almost sounds like some of those UK post-punk outfits.

Singer Lorna Donley has a real striking and beautiful voice in a non-traditional sense. She sounds like a cross between Siouxsie and Patti Smith. Her vocals were a perfect fit for the music the band plays including the driving bass lines she plays as she sings. Their song, “Dark Rooms” really should have been on everyone’s list of top songs the year that single was released but sadly the single seems to have been widely overlooked and only the most die-hard record collectors or people who were in the scene at the time have a copy.

This album collects nearly everything the band ever did, including some unreleased tracks. This LP contains one song from the aforementioned 7″(oddly enough the b-side of that single isn’t included) , the five songs from the 12″ EP (one is a different, unreleased mix), plus some demos and live tracks that makes a grand total of 13 songs, with one of them being a Who cover. Everything on here sounds great and it is pretty amazing how timeless this music is as it still holds up well and sounds fresh even by today’s standards, which is a testament as to the creativity of the early punk rock scene.

The record comes in a full-color standard jacket with a printed inner sleeve that contains a bunch of photographs of the band and all the recording information. On the back cover there is some liner notes that give a too-brief overview of the band. The record itself is pressed on white vinyl. There is also a digital version for those of you who have abandoned the superior vinyl format.

I was really happy to see that this band has been given a second chance to be heard with this LP as they were a really enjoyable and pretty unique band that should be much more of a household name than they were. Anyone who is a fan of old punk, goth, wave, post-punk, etc. needs to hear this record and catch up with what they missed.