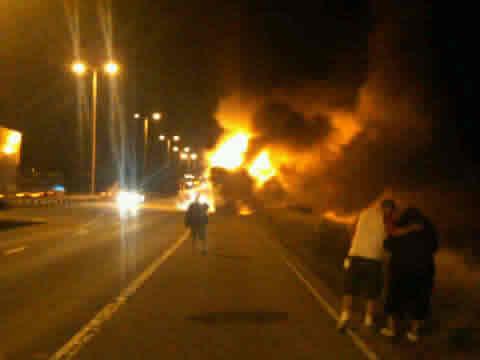 Late last week Fear Factorys narrowly escaped fire that quickly engulfed their tour bus while in route to London. The fire reportedly stemmed from a back wheel tire before spreading throughout the double-decker coach. BBC News confirms the fire closed down two lanes of the southbound M1 as Northamptonshire fire officials battled the blaze.

“We had just finished playing a sold out show in Sheffield and we were on our way to London. Everyone was asleep except for two of our crew. At about 3:30am the bus driver noticed smoke coming from the back right wheel. He stopped, jumped out and noticed a flame underneath the wheel well.  He tried to extinguish it but the flames were too much.  Everyone on the bus was woken up by one of our crew yelling ‘Get everyone up and out of the bus.’ Everyone grabbed their bags and ran off the bus. We stood on the side of the freeway going ‘thank god we all made it out’ until someone noticed our merchandise guy was still asleep on the bus. A good friend of ours ran back on the smoked-filled bus and got him out just minutes before the bus was completely in flames. Our eyes are burning and we were all coughing from the smoke. Some of us lost wallets, money, computers but that’s not important compared to our lives. It only took about 20 to 30 minutes for the bus to be completely covered in flames. The fire trucks and the police finally arrived but it was too late to save anything on the bus.  A coach bus picked us up and brought us safely to a nearby hotel. We found out only a short while ago that the trailer was saved where all our gear was. But the bus is just a metal frame on the side of the road.”

Fear Factory are currently on tour in the UK continuing performances in support of their latest album, Mechanize.