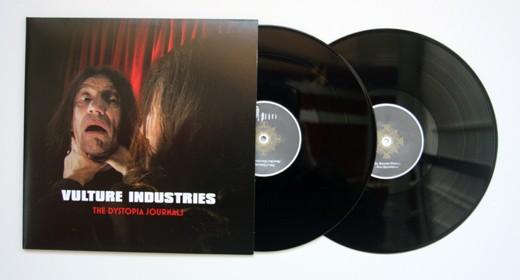 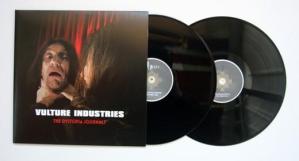 Vulture Industries is a gloomy/gothic metal band from Norway that formed in 2002. It took them five years before releasing a full album though, which only now sees a U.S. release on the correct format of vinyl.

The Dystopia Journals is quite an epic album, especially for being the band’s first. The songs are mid-tempo and gloomy, with a pretty heavy goth influence. The guitars and layered and metal influenced for the most part but they also incorporate keyboards and a hint of industrial music influence in there as well. There are parts of songs that feature some growling vocals but for the most part the vocals are melodic and dark. They sort of remind me of My Dying Bride but with more of a balance between the goth/gloom and the metal. They are more experimental as well. The songs are fairly lengthy but because they offer so many changes they never feel long and the album pacing works great from beginning to end.

The album is pressed on two black vinyl 180gm discs that play at 45 rpm. They are housed in a full color gatefold jacket that inside has photos and information. There is also a poster-sized lyric sheet included. The packaging, mastering, and presentation are all top-notch.

In a metal world that is mostly crowded with thrash, death, and black variations taking up most of the space, it was a breath of fresh air to find this band who has branched out and is far more experimental. Their experimentation paid off as this is a really solid album from start to finish and one that is going to be spending a lot of time on my turntable this year.

Experimental gloomy/gothic metal with additional influences that is a breath of fresh air. Incorporates the best of the past with the future resulting in a high quality album.