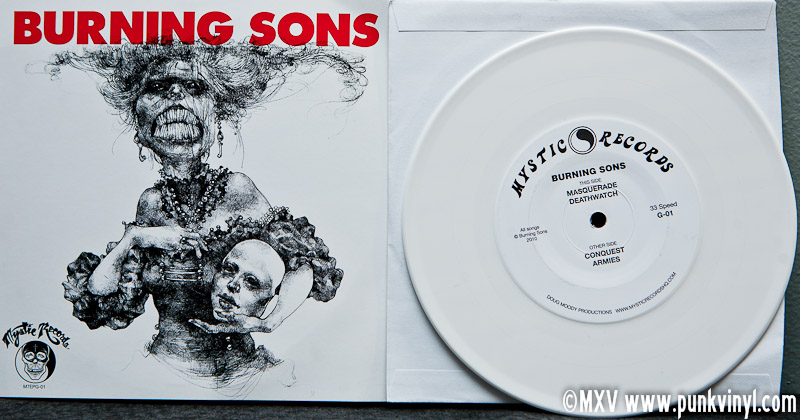 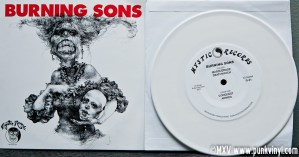 Milwaukee’s Burning Sons have the distinction of having this, their debut EP, be the first new 7″ released on Mystic Records in 20 years. With such a huge history of bands that rank from legendary to virtually unknown, being the first band to have something out in so long is a lot to live up to.

Burning Sons are a hardcore band who take obvious inspiration by the bands who have come before them on the label and ones they likely grew up with in general. They are mid to fast-temp songs with slightly metallic guitars. At times they are reminiscent of Cro-Mags mating with Battalion of Saints with a little Agnostic Front or Murphy’s Law thrown in for good measure. The guitar is punchy and really distorted and the vocals are fairly angry sounding and powerful in that classic hardcore style. While they aren’t breaking any new barriers with their sound or reinventing the wheel, they do deliver a pretty solid debut EP .

What you won’t find returning with the re-introduction of the “Superseven” is the generic photocopied packaging as this release is of a higher quality than the 7″s of the mid to late 1980s. The sleeve is printed on nice stock and is black and white with one spot color. It is a folded sleeve with lyrics and photos printed on the inside. The record comes on white vinyl and the pressing is limited to 500 hand-numbered copies.

It’s nice to see such a legendary record label release something new after all these years and the old man found himself a pretty solid band to pick to come out of semi-retirement with. Fans of the old Mystic Records will likely find this a nice addition to the collection and one that fits in with many of the older releases.

The return of the Superseven by a new hardcore band from WI with a very classic and familiar sound. A pretty good way to re-introduce the label and a nice upgrade in packaging.