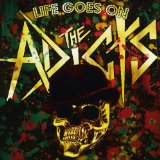 The Adicts – Life Goes On 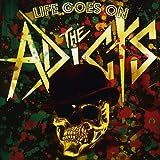 The Adicts – Life Goes On CD
People Like You Records

The Adicts is one of those rare bands that not only has managed to have a three decade career and counting, but one that still has the original lineup. I can’t think of many bands that can claim that, especially ones that never stopped playing and recording. They also have been one of the most popular and recognizable UK punk bands since the 1980s. For the most part they stayed pretty true to their sound with the exception of when they really embraced the pop and changed their name to ADX for a spell during the 1980s. They soon changed it back and went back to their more traditional sound much to the delight of an entire new generation of young punk kids.

Life Goes On is their first new studio effort in almost five years. The music is light-hearted and upbeat. They were always a fun band that never took themselves seriously, instead opting to write solid melodic punk songs and put on great shows. They are as upbeat and melodic as ever with punchy guitars driving their sing-along pop/punk gems. Their songs are pretty infectious and will get stuck in your head even after only one listen, a trait they’ve had nearly their entire career.

The album contains thirteen songs. If you like one you will like them all as there’s not a lot of diversity to their songs, they are just straight forward catchy punk tunes. The production is pretty good with the vocals having a nice full sound and the guitars are loud enough to give the songs some spunk but never overpowering.

The CD comes in a jewel case with a full color booklet containing all the lyrics (to help you sing along the next time you see them play) and some photos. It is a solid album from start to finish proving that these age is just a number and these punk rock veterans still have the chops to write catchy tunes and justify their sticking around so long. Now let’s hope they return for a full US tour to support this album because if they do, it’ll be one of the most fun shows you’ll see.

The Adicts – Life Goes On

Another solid album of catchy pop/punk tunes from these veterans.