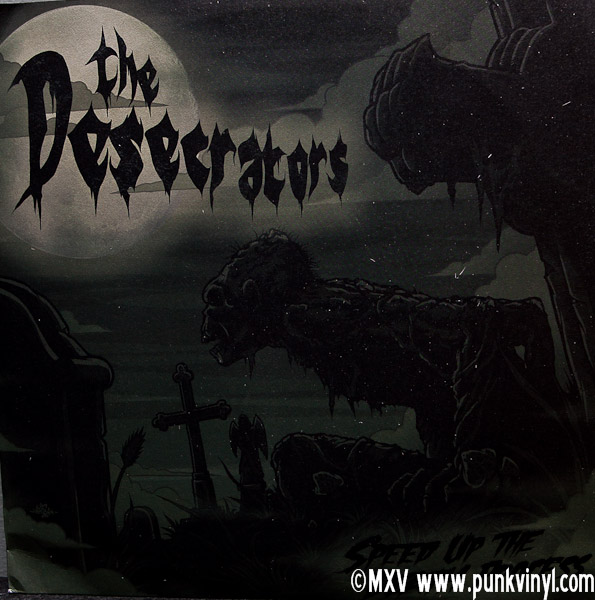 The Desecrators – Speed Up the Death Process 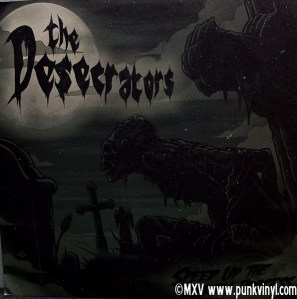 A great unreleased recording by a UK trash band with metal guitars that would have been huge had they lasted long enough to release this 23 years ago!
Rating:

The Desecrators – Speed Up the Death Process LP
Pro-Anti Records

The Desecrators was a band from England in the mid 1980s that lasted only a couple of years and never put out a record during that time. Their lack of recorded output wasn’t for their lack of trying though, at one point near the end of their short career, C.O.R. and Music For Nations expressed interest in putting out their record but by the time the band scraped together enough money to record some songs on a meager 4-track recorder in a homemade studio, both those labels either passed or fell on hard times and couldn’t release it. The band broke up and the recordings sat in a band member’s home for over twenty years.

You can probably guess where this is leading. After pestering from people who were fans of the band when they were around, the singer/guitarist dug out those tapes, had them cleaned up and now The Desecrators finally have their record out 23 years posthumously. You know the old saying, “better late than never”? It certainly applies here.

The Desecrators played a really fast thrash hardcore/metal hybrid. They had really fast and frequent guitar solos that screamed heavy metal but this was built on a pretty traditional hardcore thrash foundation. Their lyrics were of a political nature as was many of the UK bands back then and the whole thing sounds like a sort of mix of The F.U.’s and Crass if both were on the verge of admitting they loved heavy metal guitars.

The songs are all fast-tempo with screaming distorted guitars. The production on this is rather thin which makes sense considering the means by which it was recorded but it sounds no worse production-wise than a lot of old hardcore 7″s that were done on miniscule budgets back in the old days. The songs are extremely well-crafted and had these guys put out a proper record back when they were an active band they probably would have become a huge successful touring band back then.

The album contains 12 songs, which was everything the band recorded at the time. It comes on black vinyl in a thin, color, standard LP jacket. Sadly there was no lyric sheet. Much like the band was short-lived, this LP will be too in terms of availability as they only made 250 of these and have no plans to produce any more of them once they are gone. As always, it is such a treat when someone finds these punk rock artifacts and invests the time and money to preserve them in a proper vinyl format and make them available to people. This LP is a must for fans of old hardcore and thrash, especially the ones that enjoyed when those band started dabbling with incorporating metal influences in their guitar work without turning into a cheesy rock band. This sort of release deserves to be supported and encouraged so grab one of these before they are gone, it’ll totally be worth it and the postage-paid price to the USA is cheaper than a lot of the large domestic labels are charging for their fancy reissues.