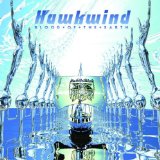 Hawkwind – Blood of the Earth 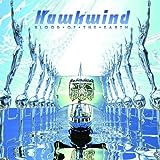 Space-rock pioneers latest offering that blends a lot of electronics and other influences for a pretty good progressive electronic space-rock album.
Rating:

Hawkwind have been around for as long as I have been alive on this planet, which is a shockingly long time now that I sit down to think about it. In their four decade career, the band has put out more albums than anyone can easily keep track of and trying to track their lineup changes would require a flowchart as big as my living room wall. A lot of people did time in the band over the past forty years including Lemmy of Motorhead (before he started Motorhead). The band’s influence is undeniable and they were at least partially responsible for shaping musicians that would form metal, punk, and space rock bands that we all grew up with (well those of us who are old enough to remember a world that had no internet, cell phones, or many computers).

Blood of the Earth is the first new Hawkwind album in five years. For this album they sort of took a lot of the elements that made up the band at various points in their career and blended them together. The music is best described as progressive electronic space rock. There is an awful lot of electronics, synths, and keyboards in all the songs, including occasional samples. The electronics are used to really accentuate the spacey and progressive atmosphere. This atmosphere is made more dense by the flange-laced guitars and melodic, spacey leads.

The songs are also quite melodic. You won’t find any heavy, crunchy riffs on this album, in fact the songs are all very accessible and tame. The band create a very dense and interesting sound with the numerous effects and layers of sound they created in each song and the vocals are very catchy and are mixed just low enough to not distract you from the instrumentation, but instead become another element of it. The band did a good job blending all these different influences, many of which they were an influence they actually created years ago. For a band that has been around forty years, they certainly haven’t gotten boring and Blood of the Earth is a really enjoyable album from these musical pioneers and one they can be proud of having in their discography.