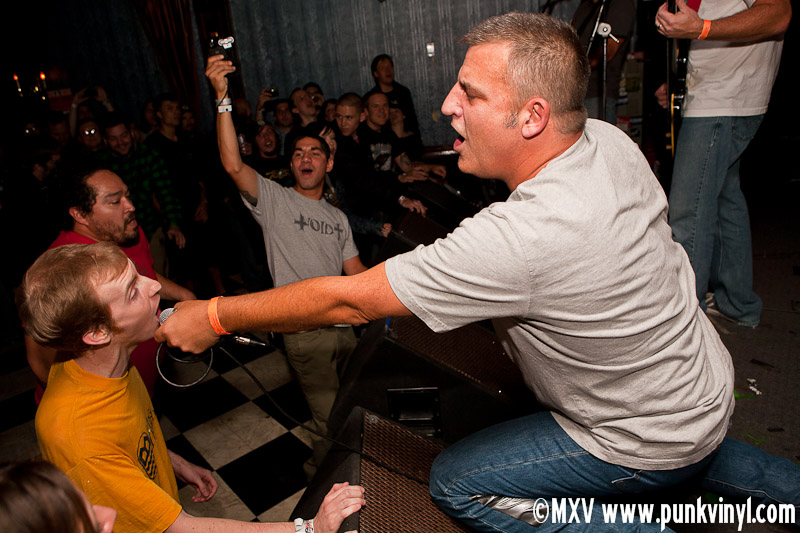 The second night of Riot Fest saw another Chicago area punk band from the 1980s reuniting just for the show. This time it was the Bhopal Stiffs who returned from the dead. They were from the suburbs of Chicago during the mid 1980s and in their short time together, put out two great records and played a bunch of good shows. The band also happened to feature Larry Damore, who went on to form Pegboy after Bhopal Stiffs broke up.

Squared Off played first. They played some fast paced musical punk rock. Their songs were catchy and pretty fast, but not hardcore fast. They played a rather quick set of originals that sounded great, and ended with a cover of “Suspect Device” which was not so great, though a lot less offensive than a lot of other bands covering that song. They didn’t need it though, people were really digging their own songs.

No Enemy followed up a few minutes later. They played really quick and energetic punk rock that was full of hooks and melody, all fast paced. They really have improved a ton since last year and have gotten tighter and seem to be finding themselves. At times they sounded like a faster Hot Water Music or early Small Brown Bike. They played a very entertaining set and had a good, fun attitude about them.

Mexican Cheerleader were next. They featured Pete from Oblivion on bass/vocals. They came out of the gate at full speed, which was a rather fast speed. They had a 70s punk and a bit of garage vibe to their punk rock and they too had pretty catchy songs. They were a fun band and crafted some cool songs. They did a cover of “Bomber” from Motorhead and while musically it sounded very good and more punked-out, Pete just didn’t have the voice to pull of that song in a compelling way. His vocals sounded out-of-place with that style of music. That and he didn’t adjust his microphone to mimic Lemmy’s which everybody knows is the key to his power.

Then the moment most people were they for happened, the Bhopal Stiffs took the stage. It was the full original lineup and Larry was positioned on the right side of the stage playing a guitar. They opened with “Road to Bhopal” and then played “EPA” which the other guitarist sang. It sounded really good, full of youthful energy and fairly well rehearsed. Then came time for one of their best songs, “Bottle it Up” which Larry does the singing on. He removed the guitar for this one and started singing the song. It started out great, however by the middle of the song he already looked like he started running out of gas. In fact by the time the song was done, he was totally winded. By the next song he was totally blown up and barely could stand up. He spent a great deal of time not singing all his lyrics and sitting on the stage shrugging his shoulders or looking like he was going to have a heart attack.

This practice is hardly anything new, this has been going on in Pegboy for years but you’d think for this special show he’d manage to keep it together and maybe not get so wasted before the show starts that he could perform maybe half a set before falling apart. The rest of the band tried to make up for it the best that they could, and they played very well and probably rehearsed a bunch of times for this show, but even when Larry was back on guitar duties and they shifted songs around to have him back on guitar and take a break from having to sing, he’d just fuck up the guitar playing too. It got downright embarrassing by about 2/3 through the set and he actually left the stage and said he was done before they could play their last song (and one of their best), “Not Just My Head”. The bass player, who should be commended for his fighting of a losing battle trying to salvage their show the best he could, tried his hand at the vocals for it until someone from the crowd climbed up on stage to help him out singing. The guy did a good job too!

This was a rare show where the opening acts far exceeded the band that was the biggest draw of the evening. Those of you who opted out of this for one of the other shows missed a good set of opening acts, but perhaps made the better choice for the Bhopal Stiffs show left a lot to be desired and sadly was a rather big disappointment.

Check out some additional photos from this show here.