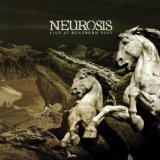 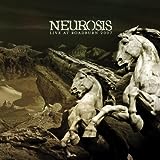 Neurosis celebrated their 25th anniversary as a band this year meaning they have outlived most bands who started around the same time as them, not to mention they’ve outlived most bands in general. Unlike most bands whose best work was their first couple of records, Neurosis’ best work came a few albums in and starting with Souls at Zero, the band has put out some of the heaviest, best,  and most original records of the past two decades.

When the band ended a few years of silence with their Given to the Rising album in 2007b they not only put out their best album since Times of Grace, but they also finally played some shows outside their home state of California.  Aside from gracing Chicago with one of their rare appearances they also headlined the annual Roadburn Festival in Holland and that performance is now available as this Live at Roadburn 2007 CD.

The album opens with “Given to the Rising” which is a perfect example of how Neurosis starts with a slow build and explodes into a punishing finish. For as great as most of their records are, none of them have been able to properly convey the experience of seeing the band live which is a near-religious experience. The band is sonicaly punishing and they are chill inducing when they really open up in songs like “Distill” which is also on this album. The performance on this album was razor-sharp and awe-inspiring. It is like these guys are all wired together in the brain and have the ability to be in perfect sync at all times and they have such control over their instruments that they emit a power like no other. They also invoke a desolate emotion when the band gets quiet and slows things down that is downright eerie.

While this disc still doesn’t accurately portray the actual feeling you get while seeing Neurosis live on stage, it comes pretty damn close and is a great document of an even greater performance. The sound on here is top-notch. Everything is mixed just about right (though at times it could use a little boost in the low-end) and the album packs a lot of punch. The album was heavy on material from Given to the Rising but they also played a couple of songs from The Eye of Every Storm and A Sun That Never Sets. One of the absolute highlights was their playing “The Doorway” from the Times of Grace album which is one of their finest records.

The album features nine songs that total 78 minutes of music which is a lot of bang for the buck. The CD has some beautiful artwork from Josh Graham which compliments the Given to the Rising artwork nicely with its similar theme. Any Neurosis fan will absolutely want this album in their collection whether you saw them that year or not as it is one of the better live records to be released in years by one of the best bands of the last two decades, and one that spawned an entire genre of heavy music.

Live at Roadburn at amazon.com

Live at Roadburn at iTunes