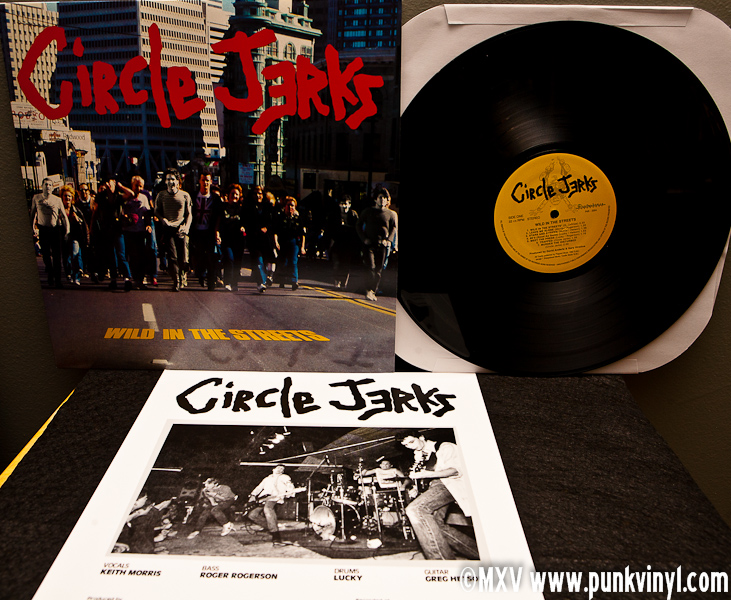 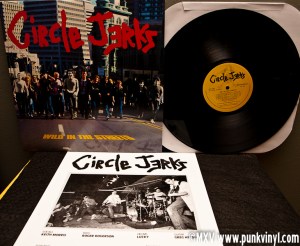 As vinyl continues to regain its former popularity more and more old punk records have been reissued and the Circle Jerks are no exception. One of the oldest and best punk rock bands from the West Coast, the Circle Jerks are hardcore legends and pioneers. Everyone is familiar with their first (and best) LP, Group Sex and that has never gone out of print and in fact is available on multiple colors of vinyl. Their second LP however, Wild in the Streets, has been in and out of print over the past couple decades and has spent a great deal of the last twenty years out of print on the vinyl format. It is now available on vinyl once again in a nicely packaged reissue.

Porterhouse Records, the label started by Greg Hetson of the Circle Jerks, just released this high quality vinyl version of the album. The album was remixed because as legend has it, the original stereo master was lost years ago for the album and a new mix had to be created from the original multi-track master. This new mix features a punchier guitar sound and a bit of a warmer overall sound, but it comes at the expense of the fuller sounding low-end of the original mix (I played them back to back to compare). The remix still sounds good however, it’s not at all like the watered down mess someone made remixing the Reagan Youth LP, this remix was done with enough care to preserve a good amount of the original feel.

The record itself is pressed on high quality black vinyl that is on the thicker end of the spectrum without being 180gm. It has a nice clean mastering job that sounds better than its CD counterpart (and let’s face it, all punk rock sounds better on vinyl). The record is housed in a full color standard jacket that preserves all the original artwork with the only exception being the addition of the remixing credits and the current label information. The record also comes with a glossy two-sided lyric sheet that also contains a photo of the band along with all the LP credits.

The LP is available at your better music stores that stock vinyl or you can order one for a last-minute Xmas gift for your loved ones directly from Porterhouse Records.