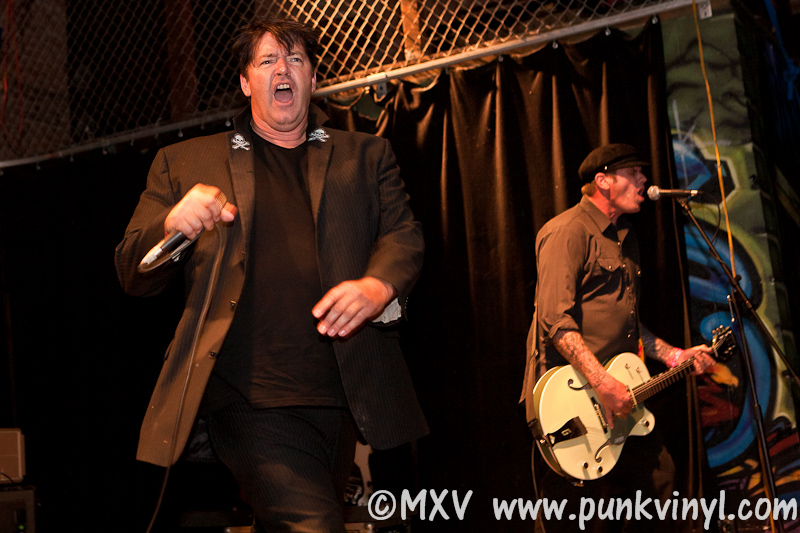 Saturday night after a ten-year absence from touring through the Windy City, T.S.O.L. made their long, long-awaited return to Chicago to play to a venue of excited fans, some of whom were babies the last time the band rolled through town! They headlined a four band bill over at Reggies in the South Loop which is about a great of a venue as you can ask for in our city when it comes to punk rock shows.

The Neutron Bombs started the evening on the correct note. These guys were even stronger this time out than their last appearance at the club recently. They have a nice blend of old US and UK punk rock that mixes energy while still maintaining a melodic side. Their punchy odd guitar tuning sounds really good and they are definitely a band worth watching for and will likely build up quite a following if they keep up the pace.


The Neutron Bombs (click any thumbnail for the full images)

Counterpunch quickly followed. They were a much more modern sounding act with more complex rhythms and instrumentation. They were all skillful musicians, especially their drummer who was like an energy machine and clearly a master of his craft. Counterpunch’s hard-edged melodic rock would have actually fit in better a the Warped Tour as they had a sound much more akin to what has been going on there the past few years than being on a bill with a classic punk rock band. A portion of the audience didn’t seem to into them as the band just wasn’t a good fit for the type of crowd in attendance this evening. For what they do though the band were quite good at it and given the right audience they certainly have the ability to win over a crowd fairly easily.

Shot Baker played third and the band was sporting yet another different guitar player. They are becoming the Spinal Tap of guitarists it seems but it never slows them down one bit. The band played a bunch of new songs that will be on some forthcoming release and all the new material sounded great. They have really developed a great energy and sound over the past few years and found their groove and sound. That sound is somewhat melodic hardcore that you can easily sing along to but packs quite a whollop. They were incredibly entertaining and another band that is well worth checking out these days.


Shot Baker (click any thumbnail for the full images)

The crowd was very excited for T.S.O.L. Many of the people in the audience moved up front and the size of the crowd had grown during Shot Baker to a respectable size that had a mix of old timers and a lot of younger kids too young to have even seen the band the last time they came through town. The generation gap was bridged by a universal love for the band. The four members walked out on stage and wasted no time playing. They immediately picked up their instruments and got to work. Jack Grisham is even taller in real life than he appears in videos or photos and he was like a giant stalking the stage. As the band played flawlessly hit after hit as well as a few newer songs, Jack never stopped pacing in circles and giving a vocal performance that rivals his younger self. It was amazing how good the band and he sounded together and not only that, it was clear they were enjoying themselves. The band stopped between songs and talked quite a bit to the crowd and Jack proved what an entertaining front man he really is. He also told humorous stories about how he’s a dad now and how things have changed and some things remained the same in his older age. In a humbling move too he admitted that he was known for being an asshole when he was younger and how he regrets that he hurt a lot of people he cared about. He also mentioned how the band raised a bunch of money for some good charities by giving their last album away for free and asking people for donations for the cause which was met with a large round of applause (and rightfully so).

The band played such hits as “Dance With Me”, “Peace Through Power” and of even busted out a wonderful rendition of “Wash Away” which was easily one of the highlights of a rock-solid set. They ended their main set with “Code Blue” which the crowd went completely nuts for. They followed it up with a two song encore that sadly omitted “Weathered Statues”! How could they have not played that?! It was really the only blemish on an otherwise amazing performance and hopefully the band won’t wait as long to come back through town again because a lot of people would love to have them back after this evening’s showing.