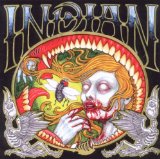 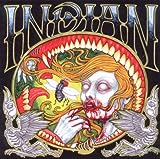 Brutal and punishing doom so intense that it is intimidating.
Rating:

When I saw Indian play last year, they were so incredibly loud and punishing that it was almost physically painful to experience them, that is how powerful they were. They were easily one of the most intense bands I’ve witnessed in the past few years and it was pretty awe-inspiring.

For their third album, Guiltless, Indian find themselves a new home on Relapse Records which is a label with an amazing track record of heavy music. Indian pulls no punches with this album, it is relentless and is downright intimidating with its punishing intensity. The guitars are super thick and down-tuned into this sludgy-doom buzzing that vibrates your inner bones. They may change tempo but they never let up with their aural assault and turned up loud enough they could be considered sonic weapons of mass destruction. The drummer must have the strongest arms in the world as his insanely brutal and powerful drum strikes make me feel bad for his drums and sticks and it wouldn’t surprise me if he goes through tons of drum heads a year.

If you think the music is intense, the vocals add a whole other layer of intensity to the Indian equation. The vocals are shrieked, loud, distorted and angry. This guy sounds like a cross between a crow, a vulture, and some otherworldly demon. His throat is not long for this world as it has to take a massive toll on the vocal chords. It is the vocal equivalent to the intense punishment the band is giving their instruments and the net result is one of the most intense and powerful records in modern music today. Indian don’t sound like any other band in their scene, they have elements that make them fit in with some styles of metal but the overall sound is all their own and it is every bit as satisfying as it is exhausting. If you are a fan of super heavy and intense metal, Guiltless will be right up your alley.