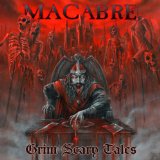 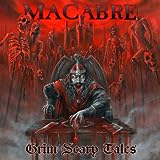 Macabre celebrate 25 years as a band by releasing a fairly strong album that mixes the classic Macabre style in many songs while also experimenting in more melodic waters with others. The result is more hit than miss.
Rating:

It’s amazing to think that 25 years ago, this metal band from my home town named Macabre sent me their first LP to review in my fanzine. It was funnier to think that since they lived in town they could have just hand-delivered it and saved themselves two bucks in postage! That record was called Grim Reality and it was a unique masterpiece that took speed metal in a totally different direction than what was going on at the time and spawned their own sound and genre: murder-metal. This three-piece band kept plugging away and soon the metal world caught on to what a great band they were and they achieved a big cult following in the underground metal scene.

Macabre celebrate turning a quarter century old by releasing a brand new studio album, Grim Scary Tales. Little has changed in the past 25 years; the same three members comprise the band that were there from the start and they never seem to run out of serial killers and murderers to sing about. Grim Scary Tales features a lot of songs in the trademark Macabre style that feature inhuman lightning-fast drumming, crunchy and speedy riffs and a heavy low-end that is also played at top speed.

Songs like “Locusta”, “Dracula” and “The Big Bad Wolf” feature the trademark speed and shrieking vocals that made the band great. The album’s only downfall is songs like “Nero’s Inferno” where they opt for an almost mock-Pavoratti style of vocal bellowing that while comical, just doesn’t fit and as a result I found myself skipping the tracks that used that vocal style after the first listen. The band also gets downright musical and melodic with “Countess Bathory” which actually works quite well and shows the band has more than one trick up their sleeve and can mix the heavy without it always having to be at lightning speed.

As a whole, Grim Scary Tales is a pretty solid album that mixes the classic Macabre style we all know and love with some new styles and experimentation not found on previous releases. The good definitely warrants the price of admission and outweighs the bad and this latest effort from Macabre is a worthy inclusion their already solid discography.