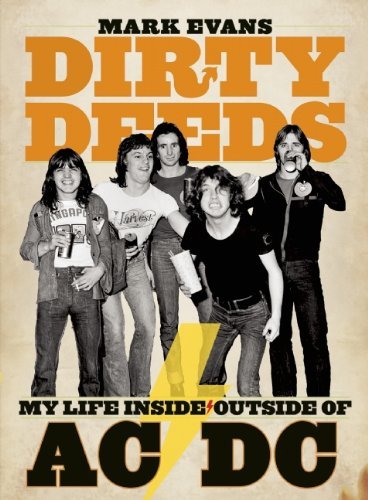 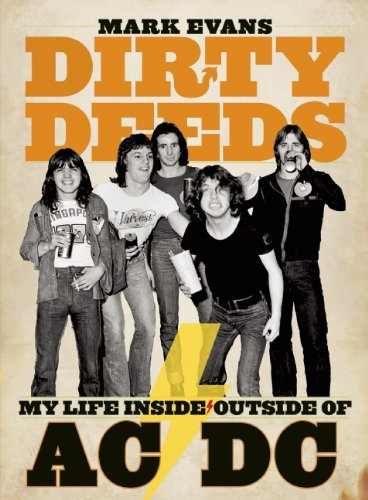 A fascinating story of one man’s roller coaster musical career and a great look behind the scenes of the Bon Scott years of AC/DC that was near impossible to put down.
Rating:

When I was in sixth grade, a friend/classmate of mine turned me onto AC/DC which promptly became my favorite band at the time (taking the title from Cheap Trick and Kiss). I went nuts for AC/DC and bought up every record of theirs I could find, including the Australian pressings (which I blame for my subsequent variant collecting that has plagued me ever since). I wore holes into those records and ended up having to replace them all at some point when I was older and knew how to take better care of my records. For as hardcore of an AC/DC fan as my 11-year-old self was back then, I really had no means to learn more about the band members or history of the band as there was no internet and it wasn’t like I had a bunch of money to buy rock magazines. Well now over 30 years later this book comes along that gives a great look inside the inner workings of AC/DC in their early years as they grew into what became one of the biggest (and longest lasting) rock bands of all time.

Mark Evans was the first bass player they counted in AC/DC. They had someone in the band before him but it didn’t work out to the point that the band wouldn’t even mention his name. Mark grew up in Australia and started playing bass at a young age when he was bitten by the music bug. After playing in a bunch of bands that never really lasted or went anywhere, fate intervened one night when he ran into an old friend who introduced him to members of AC/DC who just so happened to be in need of a bass player. They had an audition and Mark made the grade and was welcomed aboard the AC/DC freight train that would change his life forever. During his tenure in the band he spent most of that time (a few years) on the road playing gigs almost every night and then he got a crash course in studio recording as the band would go into the studio and write/record/mix an entire album in the span of two weeks. He learned that being in AC/DC was more than a full-time job, it was his entire life. There was no time for family or friends as it was work, work work, all the time, every day and the members of the band even lived together.

Dirty Deeds tells Mark’s story that starts with a brief history of his childhood and how it led to his love of music. It then goes into how he started playing the bass and how that and the bands he played in led to his chance meeting with the members of AC/DC who took him in as their new bass player. He has an incredible memory for details of these things that happened over 30 years ago and the details of the inner workings of AC/DC are fascinating. Mark tells the story about how the band was playing small bar gigs to sparse crowds and how through hard work and a lot of word of mouth from the people who would attend their gigs, the band started getting a name for itself and starting rising. It isn’t just the gigs you learn about, you learn about how the band was run, how the songs were written, how much each member was paid, and the personalities of all the members. There’s a healthy bit of stories, both good and bad about the various members but they are delivered in a very matter-of-fact way and there isn’t any bad-mouthing or even any resentment  in his stories. In fact the stories are delivered with utmost respect and Mark regularly points out just how amazingly talented he thinks each member of AC/DC is and despite the fact that he was eventually fired from the band after three albums, he doesn’t have a bad thing to say about anyone and completely owns-up to mistakes he made in the past.

Through Mark’s stories you will learn a lot of cool little bits of AC/DC trivia such as why the songs on the High Voltage album were different between the Australian version and all the versions released outside that country. Another cool story was the one how Atco Records passed on the Dirty Deeds album (talk about bad decisions!) which explains why it took so many years to come out anywhere aside from Australia. Sadly he doesn’t recant why the original cover art or track list wasn’t used on all the non-Australian versions once it finally did come out, but he was out of the band by that time so that’s probably why.

Mark’s story is a very interesting one both inside and outside of AC/DC. He covers what he did upon his untimely departure from the band, his family and friends and he’s endured both his share of tragedy and highs and in the end he seems to have come out a level-headed and content person who appreciates life and his passion for playing music seems as strong as ever. Dirty Deeds is 270 pages of pure reading enjoyment that was extremely difficult to put down and the only gripe I’d be able to come up with is that it wasn’t longer as I ended up finishing the book in record time.

As a long-time AC/DC fan (and one that prefers the Bon Scott years that this book covered), Dirty Deeds was long-overdue and essential reading and anyone who grew up liking the band will find this book to be a great and informative read and is highly recommended.