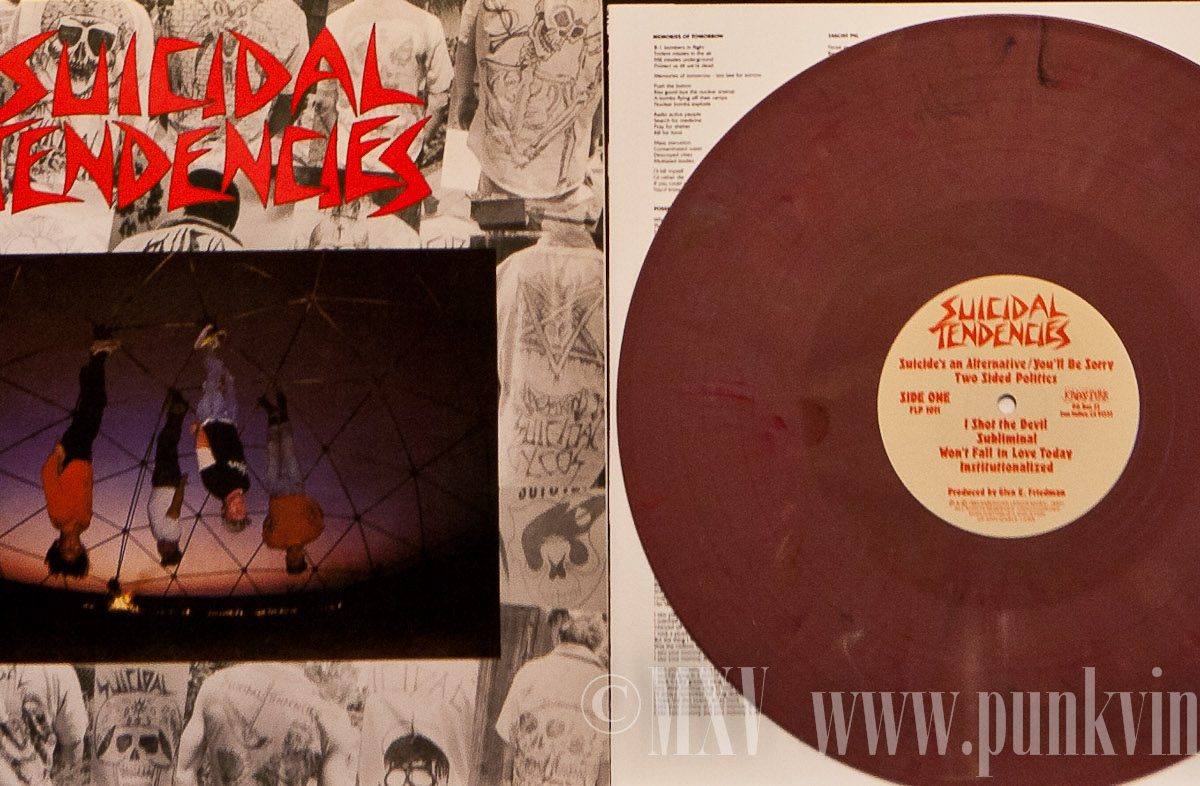 One of the best-selling albums in punk rock history got itself a multicolored tan for the spring. The album I refer to is the first (really the only great) album by Suicidal Tendencies, an album that had no title but had some of the finest songs from the time on it. This classic album has such great tunes as: “I Saw Your Mommy”, “Suicide’s an Alternative”, and one of the best known songs in the entire history of punk rock, “Institutionalized,” which is a near-perfect song whose only flaw is Mike’s choice of the inferior cola in the story (because who in their right mind would choose Pepsi over Coca-Cola?!). This album has it all and I seriously wore out my first copy I got of this record back in the early 1980s. Thankfully I have about a dozen copies of it now on various colors of vinyl so I always have a mint copy to play at my disposal and I can pick which color based on my mood, kind of like an audio mood ring. And that leads me to the purpose of this story.

This masterpiece now comes on a new color of vinyl, and one that assures you that no two will be alike. Much like the Circle Jerks first album, this first Suicidal Tendencies LP is now available on mixed color vinyl. What that means is the plant throws in whatever leftover color pellets they have on had from other jobs they were running and the results are randomly mixed colors that often times look purple and gray with a lot of marbling in them. This particular copy I was sent was a brownish purple with some black and white bits in there for good measure. You could get one like this, or yours could end up being something totally different. You never know until you open it. It is like the lottery, except you have something to show for the money you spent in the end, and a great record to put on your turntable to listen to.

This limited edition color, as always, should be in the bins of your local record store if they have a modicum of good taste, if they don’t, you could always go direct to the source and buy one from the Frontier Records Website, where a pair of really nice ladies will lovingly package it up and ship it out to you in no time at all. If you are a store and you want to stock these, Frontier Records catalog is available through Independent Label Distribution, a distributor who also stocks a lot of other top-notch labels.