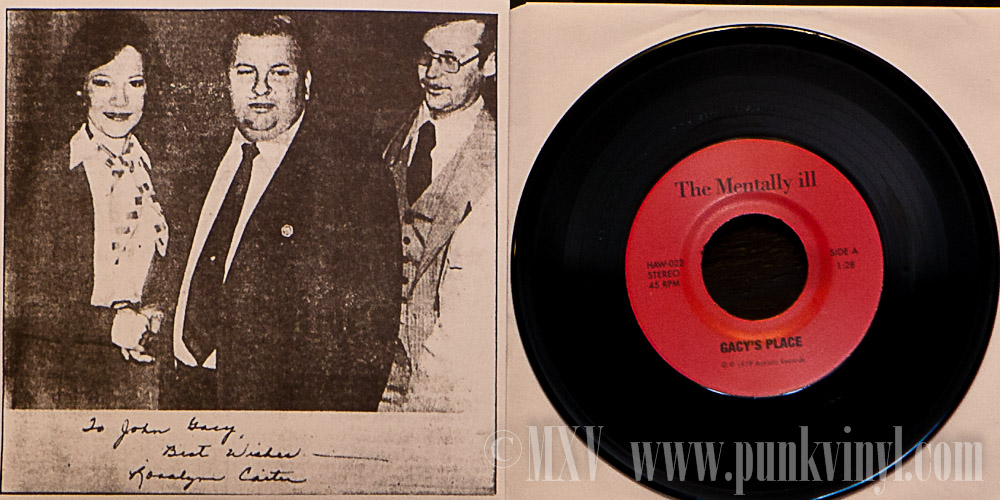 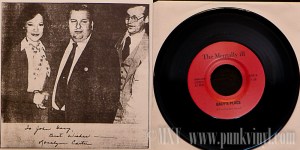 Way back in 1979 a little-known punk rock band from the Chicago area (Deerfield to be exact) had the distinction of being one of the earliest punk bands from the Windy City (the actual first Chicago punk band title is widely accepted as belonging to Tutu and the Pirates). The band was called The Mentally Ill and they put out a 7″ titled “Gacy’s Place” which was even more obscure. The band never played any shows back then and legend has it they would sneak copies of their 7″ into the grab bags of 7″ sold in the back of Wax Trax Records to get them out into the wild. The band in that form called it quits for a while soon after and their 7″ flew underneath the radar of nearly the entire punk rock community with the except of the most hardcore of obscure record collectors and as such, a “KBD” legend was born and twenty years after the fact, The Mentally Ill’s single became an expensive collectors item.

The band has the distinction of being one of the most sick, deranged, and demented bands ever to play punk rock, or even just music in general. There has never been a band that sounded like The Mentally Ill. They had this fuzzed-out, squelching guitar sound that is borderline ridiculous and will make eardrums bleed. Their drumming was pretty straight-forward which conflicted with their also-fuzzed out bass sound. The vocals are snotty and grating and to anyone who doesn’t have an ear for art-damaged punk rock, a layman would find their sound akin to nails on a chalkboard with a steady and fast drum beat keeping it going. And therein lies the charm of the band. The band is so twisted and so out-there that it works, and they were awesome. Their twisted brand of noisy punk spit in the face of conventional rock music and that was the foundation on which punk rock was created, and The Mentally Ill was as punk rock and un-accessible as it gets. There’s a good reason now why people will shell out a hundred dollars or more for an original copy of “Gacy’s Place” on eBay, it is because that 7″ is a one-of-a-kind classic and it really was a crime that it went for decades nearly completely forgotten and overlooked which was due largely in part to the band’s lack of shows and short time together in their first stint together.

It took 28 years before The Mentally Ill would take a stage for the first time to celebrate the release of a documentary on Chicago punk rock called, You Weren’t There, and at the same time the band unearthed the rest of the Gacy’s Place recording sessions along with other unreleased material from that era and released them on an album on Alternative Tentacles Records. The Gacy’s Place 7″ in its original format however remained out of print and relegated to those with a lot of disposable income to purchase on online auction sites. This finally changed on the single’s 32nd birthday as this 7″ has now been lovingly reissued in its original form.

Last Laugh Records has graced the record collecting community with a very nice vinyl reissue of this single in a very nice package that does justice to the original in its presentation. The 7″ is pressed on a nice thick vinyl (black, just like the original) and comes housed in a picture sleeve that reproduces the original pressing (the first pressing no-less with the white border). The differences in the sleeve compared to the original is the addition of the 2012 date and being on Last Laugh Records, and the stock is a much thicker glued cardstock sleeve versus the original’s glued, paper sleeve. The sleeve is durable and will retain its shape unlike the original pressing whose sleeve was flimsy and prone to damage and creases. The labels are a different color than the original pressing, and the information was slightly changed to reflect the new edition but overall they look very close to the originals which was a nice touch. The record itself sounds great, and as fuzzy and demented as ever. It sounds just like the original, but perhaps better as it is pressed on a higher quality vinyl.

It’s great that this sick, yet amazing punk rock artifact has been resurrected in its original format and presented in how it was originally meant to be heard, and held. Last Laugh Records did an amazing job spending their hard-earned cash to reissue this thing and it is worthy of inclusion in every punk record collection. It’s a legendary piece of punk history that now won’t require skipping a car payment to have spinning on your turntable and well worth the money.

The Mentally Ill on the punk database