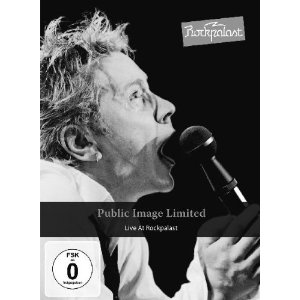 There’s no question that the first three Public Image Limited albums are post-punk masterpieces. They will go down as legendary in the annals of punk history. John Lydon (aka: Johnny Rotten) shocked the world after the disbanding of the Sex Pistols by almost immediately starting PiL and carving out a unique style of music that was ever-changing. None of those early albums sounded alike. After those three albums, the band started experiencing regular lineup changes but still put out quality music for quite a few years, eventually enjoying some more mainstream success in the later 1980s.

Rockpalast is a German TV show that sounds like it is a better version of what MTV used to be (you know, a music TV channel) and often times they’d broadcast concerts on the network when bands would come through Germany and play there. Public Image Limited did just that way back  on Halloween of 1983. This was after their first three albums had been released and the band had gone though another lineup change with only John Lydon and Martin Atkins remaining in the band. Session musicians were hired and PiL continued on, doing a tour before releasing This is What You Want, This is What You Get  in 1984 (parts of which were written and recorded before Keith Levene left the band, but that’s a story for another day, look up the bootleg Commercial Zone album for that story).

It may have taken just shy of 30 years but PiL’s performance has finally been released for public consumption worldwide on this newly released DVD. The band performed that day to a packed house full of enthusiastic fans and the band itself was in top form, performing songs from their first three albums along with a couple that would appear on This is What, This is What You Get. The show started with the songs, “Public Image”, “Analisa”, and “Religion” before giving some love to the Metal Box and Flowers of Romance. The playing was spot-on and John was dancing about, sneering, and his vocal delivery was fantastic at this show. The show was filmed on multiple cameras that nicely captured all the members playing their instruments, the crowd and everything going on. The band played 13 songs, which included both opening and ending their show with “Public Image” and it also includes a rare rendition of the Sex Pistols’, “Anarchy in the UK”. Other standouts include “Flowers of Romance”, “Memories”, and “Solitaire” among others. It really is a great time capsule of fairly early PiL and a great live performance.

The video is presented in 4:3 full frame which is how it was originally shot and how it originally aired, and the sound is 2.0 stereo. The audio sounds excellent and is actually so good it is amazing that they never released it as a live album. The video quality is also excellent with nice vivid colors and a clear, sharp picture. This footage aged nicely. Bonus features includes a video of the band’s sound check and a brief interview with John Lydon which was interesting, albeit brief. It rounds out the package nicely on what is a fantastic concert film. The running length is about 75 minutes long. This DVD is a must-own for PiL fans and it’s great that it has finally been made available.