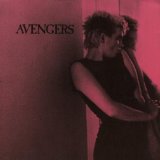 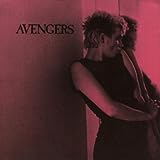 A reissue more than two decades in the making of this seminal punk album. One of the best punk albums of all time and a true classic in a nicely packaged reissue that only loses points for not including the lyrics in the fancy booklet.
Rating:

In the late 1970s, seminal San Francisco punk rock band, The Avengers released their first single on the legendary Dangerhouse Records as well as a four-song 12″ EP on White Noise records. Both records made a pretty good splash and the band, though short-lived, became hugely influential on countless generations of punk rock that followed. Before disbanding the band had recorded an album’s worth of material that was released posthumously on the CD Presents label as a self-titled LP, affectionately referred to as the “pink album”. That album went out of print by the very early 1990s and remained unavailable for two decades on any format except in the form of bootlegs. The rights to the album were something of a controversy between the band and their former label which only added to the delay in any kind of reissue happening. Eventually whatever issues that existed were all ironed out and the result is the album is finally available again in a remastered and expanded edition that gives the album and the band the respect that is rightly deserves.

The Avengers was easily one of the best, if not the best female-fronted punk rock bands of all time. They were also one of the first in America (along with X). The music was what could now be viewed as classic 70’s punk rock, but it was faster and harder than the bands that came before them (such as the Sex Pistols) but not so fast that they were hardcore (which really hadn’t happened yet when they were around). For as energetic and hard-edged as their music was, it was still quite tuneful. The LP became one of those all-time classic punk albums that either is, or should be a staple of any respectable punk rock record collection. Everyone I knew who was into punk rock back in the early 1980s loved The Avengers LP and nearly everyone I knew had a copy. It is a perfect album from start to finish of young, energetic punk rock with good lyrics and great tunes. It is also a timeless album that sounds as good today as when it was first released three decades ago.

It wasn’t enough just to reissue the album by itself, instead they went all out and made this a deluxe package. Disc one contains the original 14 song album that was remastered for this release. The original CD version of this album sounded pretty poor and was vastly inferior sounding to its vinyl counterpart. This has been remedied and the album sounds as good as ever and is nice, loud, and clear and packs the punch it always had but was lost in the mastering on that original CD. The second disc has 17 songs that are demos, outtakes and live recordings. The sound quality on the live recordings varies in quality but is mostly quite good and a few of the tracks were recorded at their show at Winterland opening up for the Sex Pistols final show. The historical merit alone justifies their inclusion, it is a bonus that the sound was good on these recordings.

This 2CD set is packaged in a standard jewel case. It has a nice booklet with good liner notes and a ton of photos and flyer scans. The only glaring omission of this package is that they didn’t include the lyrics to the songs inside the booklet. The photos are great, as are the flyers, but it’s a shame they didn’t spring to make the booklet an extra couple pages longer so they could print the lyrics too (at one time back in the day you could buy an Avengers lyric booklet for a dollar via mail order).

This reissue was a long time in the making and for years it looked like this album was never going to see the light of day again. It is wonderful that this important and influential album has now been made available again and a bonus that it is in such an attractive package, and that a lot of care went into its presentation. This is well worth double-dipping for if you still are holding onto your original vinyl (or even the old, short-lived CD version), and if you don’t have it you can finally remedy that without paying a fortune or settling for an inferior sounding bootleg.