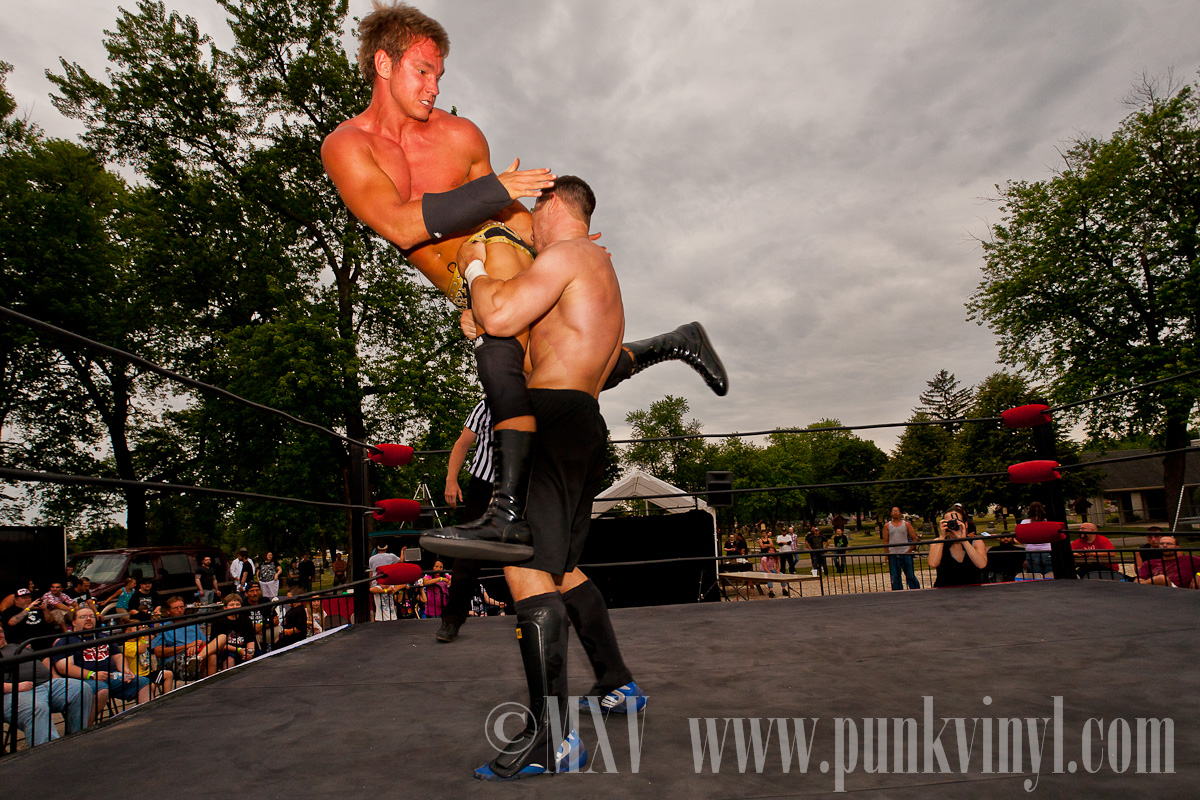 Pro Wrestling Blitz returned to Joliet for their Hostile Intent show Saturday night. This time they held the event outdoors at St. Joseph Park. The weather was about as perfect as you could hope for and the federation did their best to entertain the fans. The main event for the evening was a hardcore cage match so bloodthirsty fans really had something to look forward to.

The pre-show match was Jack Kash vs. BMK. Kash got heat with the crowd by trash-talking Joliet. The two had a back and forth brawl that was heavy on the vertical suplexes. After five minutes or so, BMK won with a Rock Bottom.

The first official match of the show was Pauly Thomaselli vs. Buddy Roberts Jr. Pauly had the size and power advantage so Roberts did his best to use his speed and agility to try to get the win. He put up a noble effort but Pauly was able to overpower him any time Roberts mounted any kind of offense and after about ten minutes, Pauly won with a sick looking Vertebreaker.

The second match was Ashton Vuitton vs. The Ego Robert Anthony. Last month Ashton cornered heel manager, Rinaldo Piven and wanted to get him in the ring to extract some revenge. Piven said he will pick a wrestler for Ashton to face and if Ashton wins, then he can get his wish at the show in August. Piven paid Ego a hefty sum to be his wrestler for the evening. After heckling a person in the crowd who looked like Santa Claus (which was hilarious) and deciding he’d give the crowd their wish and go home instead of wrestle, Piven ran after Ego and offered him more money to wrestle so he wouldn’t get stuck fighting Ashton at the next show. This ended up being the best actual wrestling match of the night. The two traded a lot of holds and put on a pretty solid match with only a couple of miscues. The good outweighed the bad and after a few impressive looking spots, Ashton managed to win with a small package when Ego came into the ring wielding a chair. Ego was so pissed off for being surprised and beaten that he started kicking the crap out of Ashton after the ref counted three. He beat Ashton down in the corner and was about to wail on him with a chair when Tony Scarpone came in and grabbed the chair out of his hands. This made Ego ever madder and he grabbed the chair, hit Tony in the gut and then floored him with a chair shot to the back. With Tony down and out in the corner, Ego placed a chair over his face and then picked up a second one that he intended to hit Tony with. When he lifted the chair over his head, Tony’s 15-year-old  son ran into the ring and grabbed the chair and pleaded with Ego not to hurt his dad. Ego turned around and superkicked the kid, laying him out! Tony managed to crawl over to his fallen son and cover him up to shield him from any further damage and Ego left the ring. Tony got a mic and said at the August show, he is challenging Ego to a death match that he promises will be extremely violent.

Next was Machine vs. Michael Anthony. These two big guys had a very slow, sloppy brawl that just fell totally flat. They couldn’t seem to get anything exciting happening and the crowd went dead during this match. Due to this, the match felt like it dragged on for way too long. Machine eventually got the win.

In a no-DQ match, Matty Starr took on Tony Rican. Rican had a score to settle with Starr as he was injured at the hands of Starr many months ago. The two had a knock-down, drag-out brawl that included a ton of chairs (that were graciously donated by the fans who tossed them into the ring). Rican started the match on fire and beat the crap out of Starr for a while before Starr was able to even up the score some. After some nasty looking bumps onto the chairs, Rican got the win and some sweet revenge. This was a solid brawl that the crowd popped for.

Mike Horning vs. Barry Ryte was next. The two had a pretty solid match and both guys came out of it looking pretty good. Ryte choked out Horning with his rope to get what he thought was the win, but in his celebration over his perceived victory, he forgot to hide the rope and when the referee saw it, he reversed the decision and awarded the match to Horning which ended Ryte’s undefeated streak in Blitz.

As the sun set, there was a handicap tag match that featured Ryan Slade, Zach Thompson and Jimmy Rockwell versus the gigantic Xavier Mustafa and his partner for the evening, Justin Reno. This match was a little on the long side with the three guys triple teaming Reno for a considerable amount of time before he tagged in Xavier to clean some house. At one point, some guy in a top hat wandered to ringside and tossed a skull to Thompson who used it to get the advantage. When he tossed the skull back to the mysterious man, he hit Thompson with it which allowed Xavier to hit his finisher on him and get the win.

After the intermission which was used to set up the cage, Hardcore Binge took on The Church with Billy Whack in their corner (or in this case, outside the cage). The two teams started fighting before they even got into the ring and once they did and the door was padlocked, it was a total bloodbath brawl. All four wrestlers were bleeding throughout the entire match as they used a 2×4, garbage cans, chairs, thumbtacks, and anything else they could get their hands on to maim each other. The crowd went nuts for every dangerous high spot they did and the match came to a climax when Hardcore Binge set a table on fire and powerbombed one of the members of The Church through it and then got the pin. The crowd went crazy for this match and all four members probably shortened their life expectancy with this match.

Overall Hostile Intent was a decent show, but not one of their stronger ones, however it did end with a few very promising angles and matches for their August show which is shaping up to be a really big one with a lot of promise. That one should be an event that wrestling fans won’t want to miss.