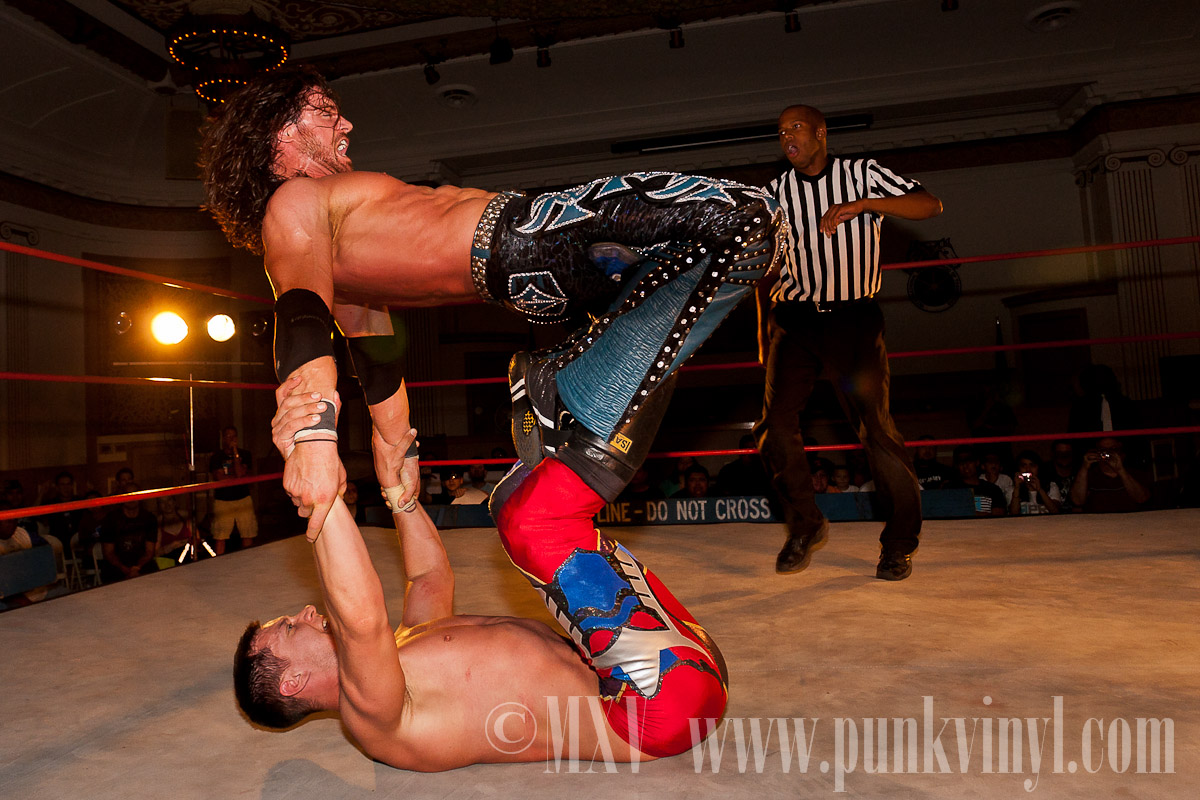 Resistance Pro Wrestling returned to the larger and more comfortable confines of the Teamster Auditorium in Chicago this past Friday night for their latest event, Fair Warning. On top of the cast of super-talented regulars, this time they were treated to a special appearance by John Hennigan (John Morrison – formerly of WWE) who wrestled a match against one of the top R-Pro stars, The Ego Robert Anthony. The event drew a good crowd, many who have become regulars at the shows.

The first of two dark matches featured Kennedy Kendrick vs. Matt Knicks. Kennedy got the upper hand early and showed some good power and timing and his stuff looked strong. Matt used his speed to turn the tables for a bit until Kennedy regained control again and took the match home. This was a quick match that was nicely paced and both guys looked good in it and put on a fun little match that got the night off on the right foot.

Skidmarks vs. Chris Castro was next. Skidmarks had an 80’s rocker gimmick and came out and played a guitar solo before the match. He was best known for being on Tough Enough where he got his name. He looked pretty good in this match and Castro looked the best he has yet in a R-Pro ring. Their match was also short and these guys also did a very good job. Skidmarks eventually got the win but it seemed that the crowd liked Castro better.

With the start of the official show, Raven came out with Harry Smith and Lou and gave a somewhat long-winded spiel about himself and his status with the company that didn’t do anything at all to put over the person he was supposed to be the manager of. When he finally switched topics they brought out Kyle who was the victim of Harry Smith’s “wrestling clinic” last month and said they were going to see how he does in a match against Mr. 450. Kyle must have been studying non-stop since his clinic because he kept up with 450 the entire match as they traded impressive looking kicks, flips, some high spots in an exciting fast-paced match. Their styles complimented each other nicely and the crowd loved it. Eric St. Vaughn was in 450’s corner cheering him on but absent this time was D’Arcy Dixon which may have been to 450’s advantage as she wasn’t there to interfere this time and as a result, 450 got the win after nailing his namesake off the top rope. 450 is always exciting to watch and Kyle was a great opponent for him. Great job by both men.

A ladies tag-team match followed that pitted Serenity and Matrix Taylor Made vs. Nikki St. John and Jessi Belle. Jessi was a newcomer to Resistance Pro and had a southern belle gimmick. This match didn’t make much sense in the fact that Serenity and Taylor recently feuded. The match went off well enough and at least Taylor and Serenity kept a sense of animosity between them going for the sake of some sort of continuity. Nikki and Jessi didn’t seem to like each other much either and it didn’t take long before everyone was turning on each other and the match devolved into everyone beating each other up with chairs. When the dust, er the chairs settled, Nikki was the last woman standing and left the ring looking pretty strong. The match itself was fine but the story made no sense and there needed to at least be an explanation as to why two people feuding were in a tag-team together.

Ashton Vuitton vs. John Skyler quickly followed. Ashton had a pretty-boy model gimmick that instantly got him heel heat with the guys in the audience. Ashton took the lead early in this match but it didn’t take long for Skyler to start countering him including hoping up after Ashton’s “catwalk” over his back and drop kicking him . When Skyler dumped Ashton outside the ring and had a clear advantage, Rinaldo Piven, Jesse Corgan and Doctor Ponzo came to the ring and interrupted the match. After some mic time and a big “WTF” from both Skyler, the referee and the crowd as to why there would be a promo interrupting the middle of the match, Ashton recovered and attacked Skyler and finished him off with a Dragon Sleeper. Great wrestling work by both men, Ashton looked the best yet in RPro and is on the path to get over good as a heel with solid ring skills to back it up. Excellent match whose only fault was the awkward interruption that didn’t seem necessary.

The Almighty Shiek and Jocephus came out next and gave a little promo about how they are now a team and titles mean nothing, they are about the violence. They called out Da Cobra and made him bow down and drink some liquid out of a cup. This whole thing made no sense and silenced the crowd who were all scratching their heads. At some point they started kicking the crap out of Da Cobra and then Ruff Crossing came running in to help him out and this started a tag-team match. Shiek and Jocephus were brutal in their attacking of both men and try as they did, Ruff Crossing and Da Cobra got a major ass-kicking which cemented Shiek/Jocephus as a monster heel tag-team that should instill fear in the who tag division of R-Pro. The match itself made up for the senseless intro that hopefully gets dropped. The tag team division just got a lot more interesting with the creation of this team and these two are capable of really heating things up for a long time.

In what will easily go down in history as the match of the year in any federation anywhere, John Hennigan (aka: John Morrison formerly of WWE) took on The Ego Robert Anthony. The crowd was super excited for this match from the moment they realized it was next. Ego got a HUGE pop from the crowd and then so did Hennigan and then they started chanting “Ego, Ego” even louder. What followed was a rare match that showcased just how a well-paced and smartly booked wrestling match can be a work of art. The two traded holds and reversals in a bunch of mini-spots that made both guys look equal and strong and ended with some sort of bigger move that made whoever delivered it the winner of that spot. The two slowly and methodically built up the intensity of their match and the crowd popped for EVERYTHING. At one point when Ego countered something of Hennigan’s and put him in one of his trademark headlocks, the crowd popped huge! The pace continued with Ego getting the upper hand in the first part of the match and then a frustrated Hennigan who perhaps underestimated Ego finally turned up the intensity and turned the tables and got vicious on Ego. Ego wasn’t about to give up and fought hard to get out of everything Hennigan had to offer and turned the tables once again to his favor. This back and forth kept going as they continued to build towards a finish that no one could predict the winner of for certain. When Ego locked Hennigan in his surfboard to go for his finisher, when he went to launch him, Hennigan countered and landed on his feet, turned around and kicked Ego in the head. At this point the ENTIRE crowd got on their feet and gave a standing ovation that could be heard miles away outside the building. It was spine-tingling and the two continued to duke it out until Hennigan managed to turn the tables just long enough to quickly hit his finisher on Ego and get the win.

Enough can’t be said about how great this match was. This kind of storytelling and psychology in a match is a rare art form in modern pro wrestling in the “big two” and is the reason why pro wrestling is so entertaining. This match was a true work of art put on by two of the most talented workers in any federation anywhere and the work of a genius agent which is another thing that is rare these days. This is also a prime example of the art of how you actually can win by losing. Ego may have lost the match but he got the rub from Hennigan and not only has he just been elevated to yet another higher level, but people will remember this match for how great it was and not care one bit about who won and who lost. This match was worth every fan’s price of admission alone.

Melanie Cruise and Thunderkitty had the tough task of being the followup match and while they couldn’t come close to equaling what preceded them, they did a pretty good job in their own right. Thunderkitty took the lead early and tried to wear down Melanie with her brand of old-school style wrestling that included the airplane spin and a sleeper hold. Eventually the bigger Melanie powered out of Thunderkitty’s attacks and got the win. A good little match that featured two regulars in RPro that are always fun to watch.

In the main event, Harry Smith defended his Resistance Pro title against number one contender Lonesome Jay Bradley. These two powerhouses traded blows and holds for the first part of their match until Bradley got the upper hand. It was short-lived as Harry rallied for a while and then Jay once again took control. This led Kyle to interfere in the match and the distraction caused Jay to fall victim to Harry once more that included a sick cradle piledriver and a kick to the nuts. Harry finished Bradley off with a sit-down powerbomb to score the tainted victory.

All in all Fair Warning was a show that featured some very strong wrestling and fun matches that more than overcame some senseless or confusing angles which is a testament to the in-ring talent this company has. They continue to wow the audience and deliver a lot of value for the ticket price. If you are a wrestling fan and haven’t been to any of their shows you are really missing out on something pretty special!

Check out more photos from this event right here!