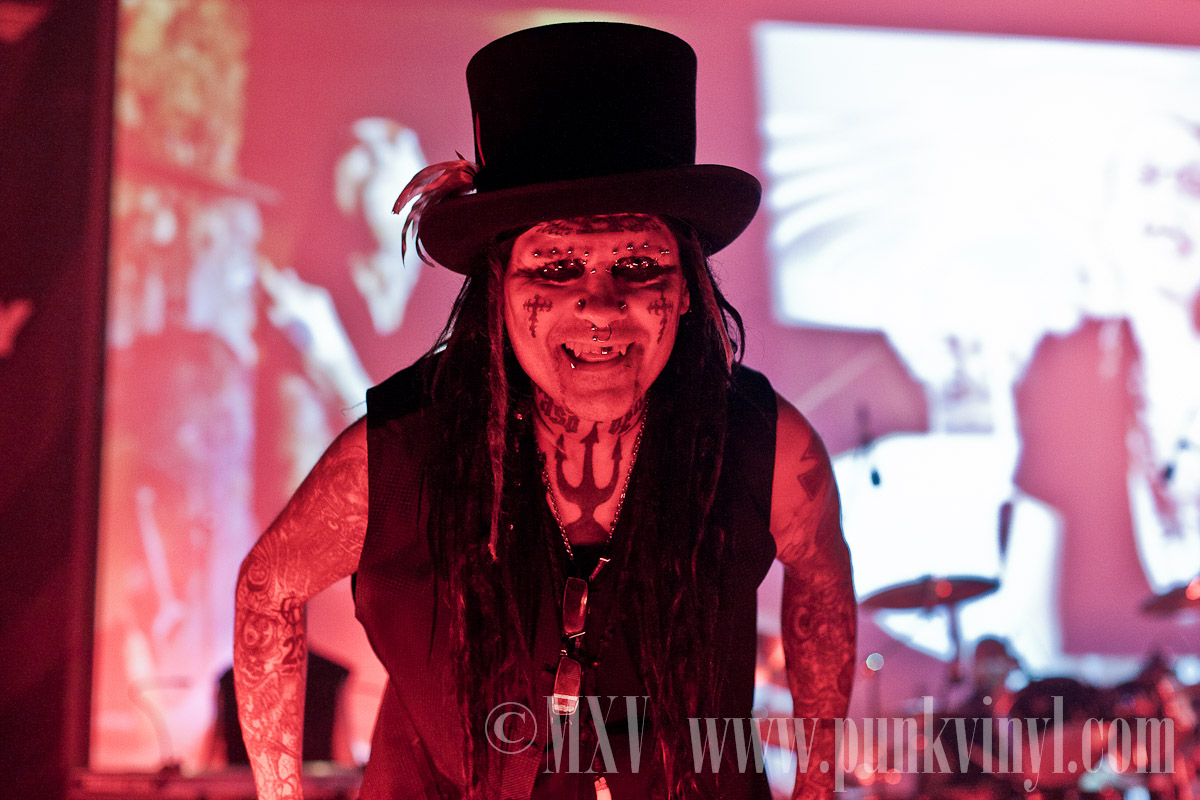 In pro wrestling retirement doesn’t have the same meaning as it does to everyone else. Countless wrestlers have had retirement matches or farewell matches, announcing retirement only to come back a year or two later (or sometimes a few months later) like the retirement never happened. Al Jourgensen must be a wrestling fan because a couple of years ago he announced that he was retiring Ministry and that their C U Later tour and their last album (The Last Sucker) was going to be the last for the band. Here we are a couple of years later and not only did Ministry release another new album (Relapse), but they took to the road again for a small handful of live shows. At one point when announcing that Al was dusting off the Ministry name and bringing it back he made a casual mention that when they toured that he’d be revisiting some more of the back catalog at these live dates. What Ministry delivered on Thursday night was far different.

After two guys in light-up bunny suits who played dubstep got the crowd warmed up (or annoyed them depending on who you ask), the stage was set for Ministry and the band, sans Al came out on the stage and started playing the intro to “Ghouldiggers” On the video screen was an image of Al speaking the song’s opening narration and then when the song kicked into full gear Al came out to center stage to start singing it. The music was very loud and power and it was good to see long-time Ministry guitar player (and legendary Rigor Mortis guitarist) Mike Scaccia back in the band. Al seemed to have spent his abbreviated retirement tattooing and piercing numerous holes in his face as he looked quite different from the last time he stepped foot on a stage in Chicago.

After the first song, the set list nearly duplicated that of their last tour. “No W”, “Rio Grande Blood”, “Senor Peligro”, and “Lies” filled up the first part of the set before they inserted a couple new songs from Relapse. The new songs did sound good in the live setting and had even more punch than they did on the album.  In between songs, or during a passage where there wasn’t any vocal duties, Al kept walking back near the drum riser to drink or refill his glass of wine. This of course led to Al getting messed up and that’s where the trouble began.

While the band continued to pump out songs from their recent works and ignore anything that the long-time or older fans would be familiar with, Al started stumbling around the stage and then his performance started becoming affected. During choruses to songs he would walk away from his microphone which revealed that the choruses to a lot of these songs was pre-recorded and that his live singing was at least partially augmented by tape/computer. This was not the case for any of the song verses however and not even the case in every song, but it still sort of cheapened the performance when this bit of trickery was exposed.

The show continued for a very long time, the band certainly cut no corners in their set time. They played songs exclusively from the “Bush-era” albums along with a few from Relapse and nothing from even Psalm 69 was even hinted at, which was also the case on their last few tours. They ended their main set with “KybherPass” which always sounds great in a live setting and this even was no exception. The band sounded great but the further into the set they progressed, the more Al stumbled around and messed up his vocal delivery often.

The band took a short break and came back for an encore and they finally took a small dip into familiar territory and busted out “Psalm 69”, “Just One Fix”, “N.W.O.” and then finally “Thieves” and “So What” this batch of songs gave the people what they finally wanted, but some of it was marred by Al stumbling through his vocals and even having to go back to a lyric book during songs to look up some words (a book that was conveniently located right next to his wine stash). “Thieves” was the biggest victim of the bunch.

When they finished, Al proclaimed that they would be back in a minute, they were just going to go smoke some pot and sure enough a few minutes later the band took the stage again for one last song, “United Forces”. At this point Al was toasted and he even fell off the stage near the end of the song and the security guards had to go and rescue him and carry him off the stage. When the dust settled, Ministry had played for about an hour and 45 minutes. While the time length was impressive, the fact that they basically played the same show they did on their “farewell” tour with the only difference being the addition of a few new songs certainly didn’t warrant a ticket price that was double what it was the last time. Including some songs from The Land of Rape and Honey would have helped justify the cost but fans who turned up to this show and shelled out a ton of money had to be disappointed by the fact that it was essentially the same show as before, except Al was a lot more inebriated than the last time they rolled through town, which gave the title of their latest offering a whole different meaning.