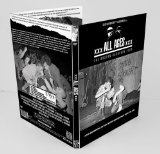 Back in the early days of hardcore punk (we’re talking early 1980’s here) there was a small number of regional punk scenes that became nationally (and internationally) famous due to some amazing and influential bands that formed in those areas. Some of the heavyweights were Southern California (largely centered around Black Flag, SST, Frontier Records and the like), Washington DC (Dischord Records, Minor Threat, etc.) and then there was Boston. Boston, MA had an amazing number of great hardcore bands in the early days and it was probably Washington DC’s closest rival as far as the sheer number of amazing hardcore bands in those early days, most of which are now considered legendary.

Making a list of early Boston hardcore bands is like making a hall of fame list of all-time greats. That scene produced such great bands as The Freeze, SSD, Gang Green, The F.U.’s, Jerry’s Kids, The Proletariat, and a ton more. X Claim! Records became the Boston equivalent of Dischord Records (who actually helped the label out by co-releasing the first SSD LP) though they only put out a few records total but every one is now considered a classic.  An entire scene revolved around the SSD/X Claim! crew much in the way a scene did around Dischord in Washington DC.

While there’s been plenty of books and films about the history of various punk rock scenes until now there hasn’t been anything that dealt with Boston specifically which seemed odd considering what an active scene they had back in the day. It was only a matter of time before someone stepped up to the plate and a fellow by the name of Drew Stone who was a part of that scene at the time was the man for the job. His film, All Ages The Boston Hardcore Film finally gives the world a history lesson in what the early Boston hardcore scene was like from 1981 – 1984.

The film starts off with live footage of a reunited DYS and Jerry’s Kids playing at a special Gallery East reunion show in Boston in 2010. They played to a very large crowd like likely eclipsed any crowd they played in front of in the old days and the crowd was multi-generational. There was old timers who were there, some with teenagers of their own, and there was people far too young to have been around when any of the bands featured in this film were active. It also has some interviews with various members of the old scene who were at that reunion show. The live Jerry’s Kids footage transitions into some really great live footage of the band in 1982 playing the same song and that starts off the history portion of the documentary and when things get interesting and educational (in the best possible way).

The movie follows the tried and tested format of a lot of music documentaries. It features modern-day interviews with as many people involved in the Boston punk scene as they could find when filming this. At least one person from all the big-name Boston punk bands was interviewed which included SSD, DYS, The Freeze, Gang Green, Jerry’s Kids, and The F.U.’s. It starts out with people giving a brief overview on what the state of music was back in those days and what the path was that led them to punk rock which almost universally was The Ramones. Aside from the musicians they also had aspiring filmmakers, artists, record label/record store folks (Taang! and Modern Method/Newbury Comics), fanzine writers, photographers and people who either put on or attended the shows. The clips are tightly edited together to form a cohesive, chronological story that covers how hardcore punk formed in Boston and where it went from there. An interesting bit of trivia: one of the female members of the old punk scene went on to become a successful actress who had a stint on 90210!

The film gives a little credit to The Freeze for pretty much being the first punk rock band in the area but when hardcore and the XClaim! bands formed and took over the scene, The Freeze were kinda left by the wayside and as a result there wasn’t a lot of time spent on them in the movie. Once the hardcore bands started forming it was universally acknowledged by everyone in the film that SSD was the hub which the entire hardcore scene revolved around and Al Barile was the kingpin, which makes it all the more puzzling why he wasn’t interviewed in this film. Other SSD members did get a lot of face time in the movie, especially the lead singer, Springa.  Al and SSD found places to do shows and put out records and basically made things happen.

Straight edge was probably more prevalent in the Boston Crew than in any other scene and that topic gets discussed plenty in the movie. There’s some great stories and even urban legends told about how militant Al and SSD was when it came to being straight edge and the women from the scene’s take on it was especially humorous. The fact that so few in the scene drank made the clubs in town even less willing to book hardcore bands than normal so other venues had to be found and that led to the SSD guys finding Gallery East which for a period of time was the place for hardcore shows.

Skateboarding, playing gigs, Newbury Comics, fanzines and recording and releasing records were all touched upon and it was interesting hearing how the This is Boston Not L.A. compilation came together and the reason why SSD wasn’t on it. Ironically even though both Gang Green and Curtis from Taang! Records are both featured in this movie, Taang Records wasn’t really mentioned at all in the movie.

As the movie progresses farther into the timeline it delves into how the scene started falling apart, bands were going metal or breaking up, and the lack of places to play. All of these things ultimately led to the original scene as everyone knew it fading away as everyone moved on in life. It was largely acknowledged that when the bands went metal things weren’t that good and that those first couple of years was a very special time that happens once in a lifetime but left a lasting impression and influence in the world of music that is still felt today.

The film clocks in at roughly 85 minutes. It is presented in the 3:8 format which is basically like full frame with the top and bottom letterboxed. It is a strange format in the day of modern widescreen televisions but it does fit more with the era that this film covers and it also means they didn’t have to do anything to alter the amazing old live footage they unearthed for this film. The old footage mostly looks pretty amazing especially considering its age and the technology at that time and the modern footage of course looks sharp and crystal clear. The sound is 2.0 stereo and the mix between the music and the interviews was very well done. Extras include a commentary track by Drew Stone where he elaborates on whatever is going on at the time and has little stories to go along with the scenes that is well worth watching the film a second time with this enabled, “The Springa Chronicles” where Springa takes you on a guided tour of his mother’s basement where he still has a bunch of old punk memorabilia stashed including some of his old records, “Rat Hunting” which is a multi-interview segment about a single topic, and some great interview outtakes. The bonus material adds up to about another half hour of entertainment (not including the commentary track obviously).

All Ages the Boston Hardcore Film is a wonderful document of a great and influential hardcore punk scene that did a great job telling the history of the scene and giving outsiders a look at what it was like to be a punk rocker in Boston in the early 1980s. If you are in any way a fan of those early hardcore bands then this movie is a must-see. If there could be on complaint thrown at this film it would be what/who was left out which was bands like The Proletariat and the obvious missing Al Barile. None of those things are a deal breaker when it comes to buying this movie though as what it does have is fantastic.