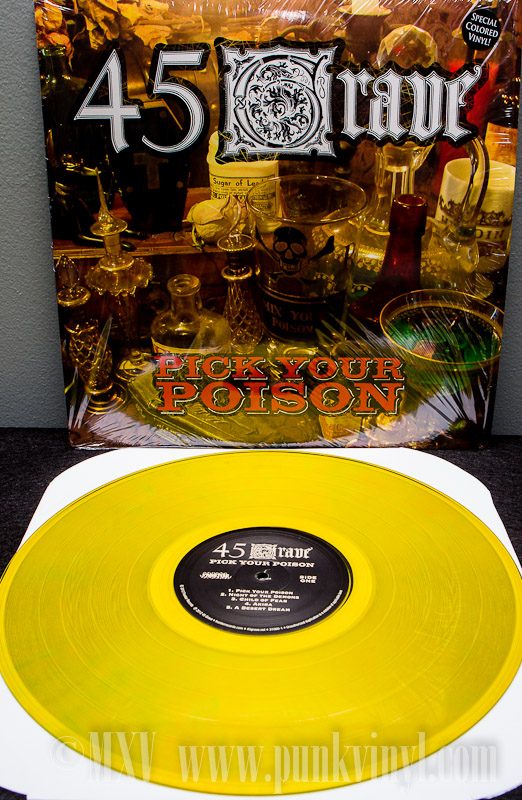 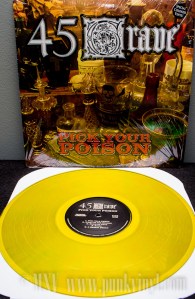 A diverse album with its foundation true to the 45 Grave death rock style. Well worth the 27 year wait for a new album!
Rating:

Back in the early 1980s 45 Grave was one of the first death rock bands and helped forge and entire sub genre of punk rock. They mixed punk rock with horror themes and a goth flavor and produced some really great original music. They released only one studio album way back in 1985 and a couple of singles before that.  They disbanded for the first time in 1985 and reformed a few years later to play some shows and release a live album. When their original bassist, Rob Graves died in 1990 of a drug overdose the band called it quits once again for a very long time. For the band’s 25th birthday vocalist Dinah Cancer reformed a new 45 Grave and started playing shows again and set up a MySpace page for the band (back when MySpace was actually a big deal). After years of sporadic shows and putting together a solid lineup this new 45 Grave finally recorded a new album which is the first new 45 Grave studio album in 27 years!

This new lineup consists of Dinah Cancer, Brandden Blackwell, Tom Coyne and Frank Agnew (of the famous Agnew family which is like punk rock royalty). They aimed to keep the spirit and feeling of 45 Grave alive while branching out into more diverse territory. Whereas the old 45 Grave material had a lot of “sameness” to the songwriting style of the songs (which isn’t necessarily a bad thing), new 45 Grave is a much more diverse band and really no two songs sound alike on this album which makes it a far more interesting record when listened to in its entirety.

The album mixes the band’s trademark death rock sound with other more traditional influences to create some interesting songs.There’s a little something for everyone mixed in these songs with more traditional death rock (“Pick Your Poison” and “Child of Fear”), party anthems (“Night of the Demons”), a bit of metal and even blues based rock numbers. Frank’s guitar work is very solid and he has a lot of leads in various songs. The rhythm section is tight and polished and Dinah’s voice sounds exactly as any long-time fan may remember, but perhaps a bit smoother. The band succeeded in creating an album that still retains the feel of traditional 45 Grave but branching out enough to make it not sound dated or retro at all. The album is pretty enjoyable from start to finish and is well worth multiple listens. Those with a little pickier palette is likely to find at least a couple of songs to their linking which certainly warrants the purchase price of the album in whatever format they prefer.

On the subject of formats, this of course comes in the superior vinyl format (as well as digital). The record comes in a full color sleeve that has a great cover photo with colors that really pop. The record itself is pressed on limited edition yellow vinyl and the mastering job was excellent as everything sounds full and crystal clear. There is no insert but all song information and credits are on the back cover (along with a band photo).

27 years is a long time between albums and in fact that may have set some sort of record. I’m happy to report that the new 45 Grave album was worth the wait and it’s nice to see the band back together in any form, let alone sounding as good as this. If you want to score a vinyl copy of this, check out the Frontier Records website. You can get a CD from them too (or from places like amazon.com) and you weirdos who hate physical media can get a digital version of the album right here.