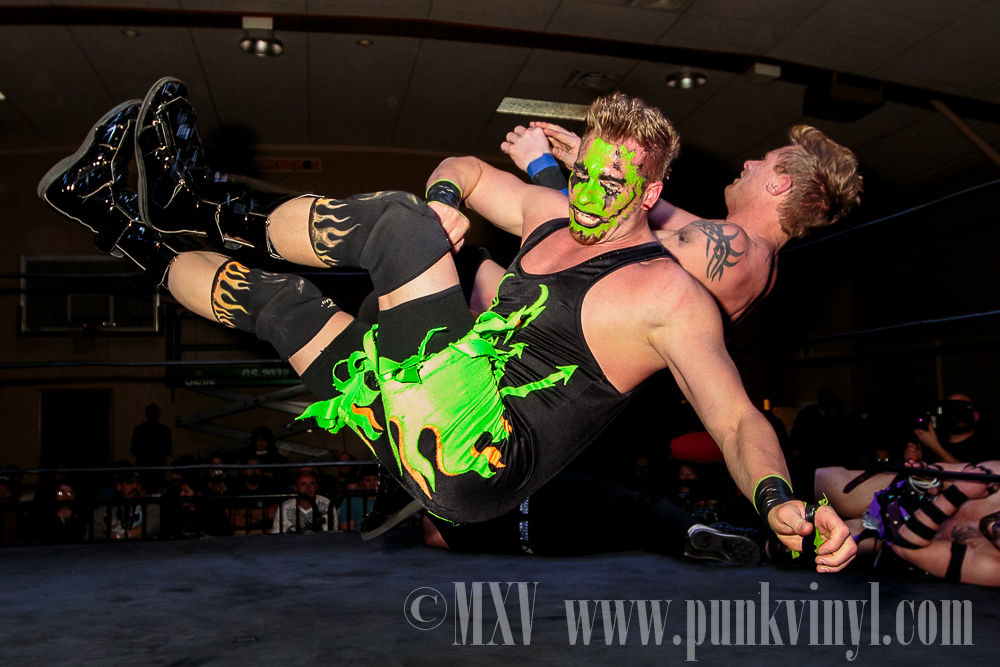 Thanksgiving weekend was not only a time for stuffing one’s face until passing out in a food coma, nor was it only for mauling a crowd of other shoppers at 8am trying to get half off of a TV, for that weekend also included the latest Pro Wrestling Blitz show titled Ring Wars. The main premise of Ring Wars was a bit like Survivor Series where tag teams (in this case teams of three) competed in an elimination style match where one team had to beat all the members of the other team in order to win the match. Ring Wars featured two of these matches plus some singles bouts.

The opening bout featured Mr. 450 vs. Jimmy Rockwell (with Kujo in his corner). This was for the No Limits title currently held by Rockwell. Mr. 450 was dominating a lot of the match and when it came time to hit his namesake finisher, Kujo interfered by grabbing his foot as he tried to climb the turnbuckle. 450 did manage to hit the finish on Rockwell but when he went for the cover, Kujo came in and pulled him off Rockwell and hit him which caused a DQ. Mr. 450 won the match but not the title (titles can’t change hands on a DQ) and 450 took the mic and demanded that Rockwell come back out and finish the match like a man. Rockwell declined as he and Kujo fled backstage with the title.

Noriega faced big Willie Richardson in the second bout. Noriega got the offense early in the match using his speed to stay ahead of Willie. It didn’t take long for an annoyed Willie to cut him off and nail him with a pounce to get the win. The fans were really behind Willie in this match too.

Before the next match a video was shown of The 3 Rings abducting Justin Reno, drugging him and then “saving him”. The result was Justin being transformed into some demented jester and becoming the newest member of The 3 Rings which either now has four members or it means that Pauly Thomaselli isn’t coming back (he was a member at the previous show).  This led to The Ringmaster coming to the ring with all three members for their match against Clancy, Kid Hybrid and Mike Horning. Reno and Grinn did nearly all the work for their team as they cheated and double teamed their way to eliminating two of the three members of the opposing team in rather quick fashion. Machine was standing on the apron the entire time with a burlap bag over his head that looked like the Scarecrow’s mask from the modern Batman movies. When he was finally tagged in, they pulled the mask off of him and he went berserk and destroyed Mike Horning in about two minutes in a most violent way. The 3 Rings absolutely dominated in this match and continue on their path of terror.

Lonesome Jay Bradley vs. Ashton Vuitton was the third match. Bradley came to the ring and instantly got into it with the crowd who were hurling insults his way non stop. Bradley is a great natural heel and has the size and the talent to back it all up and this match really showed off just want a dominant monster he can be. He spent nearly the entire match beating Ashton from pillar to post focusing heavily on Ashton’s arm and shoulder. Ashton tried to mount a comeback but Jay cut him off and leveled him with his Boomstick lariat and won the match. Not satisfied with his win and pissed off at the crowd, Jay picked up a chair and beat on Ashton’s arm and shoulder some more in an attempt to end Ashton’s career. The referees were helpless trying to stop Jay and it was only after Jay felt like he broke enough bones in Ashton’s body that he put down the chair and left the arena.

Billy Whack and Chazz Moretti came to the ring to make their respective pleas to the audience to vote for them as Blitz commissioner. Tony Scarpone came out with Chazz and a couple of times he took the mic out of Billy’s hand mid-sentence, effectively cutting off his side of the debate which coincidentally happened anytime Billy was about to criticize Scarpone.

The main event was another Ring Wars match that had The Elite (Blitz champion Ryan Slade, Matty Starr and Zach Thompson with manager Rinaldo Piven) take on Hardcore Craig, Buddy Roberts Jr. and Ruff Crossing). The team with Ruff/Craig/Roberts all were wearing jeans, cowboy boots, and Badstreet USA shirts. The Badstreet brigade started off strong but a lot of shifty tactics and double/triple teaming by the heels got them the advantage for a while as they beat on Roberts for a fairly long time. After a giant spot where Roberts and Craig both jumped off the top turnbuckle onto all three of their opponents out on the floor, the action returned to the ring and Roberts ended up getting eliminated. Craig did his share of ass kicking for a while until double teaming slowed him down and he and Matty Starr took their fight out of the ring into the crowd where both were counted out and eliminated. It was down to Ruff Crossing and Ryan Slade who proceeded to beat the hell out of each other. Ruff was on fire attacking Slade but he eventually got the upper hand and nailed Ruff with a neck breaker that left him laying. Slade wanted to add insult to injury and picked up a near lifeless Ruff to give him another one and Ruff was able to reverse into a backslide and got the surprise pinfall. He scurried out to the floor with a look of surprise almost as big as the one on Slade and Piven’s face. They were furious and couldn’t believe what just happened and in his excitement and anger, Piven stripped out of his shirt, tie, and shoes and was walking around the ring half-naked. Mr. Ricolo came out with a microphone and informed the audience that Ruff Crossing now gets his rematch with Slade at next month’s show, The King of Joliet. That should be a great match as there’s a lot of heat between the two combatants.

The book on Ring Wars was closed with some fine matches, the promise of a great title main event next month and the continued dominance of The 3 Rings. Next month’s show should be an exciting one building off the developments of this show.