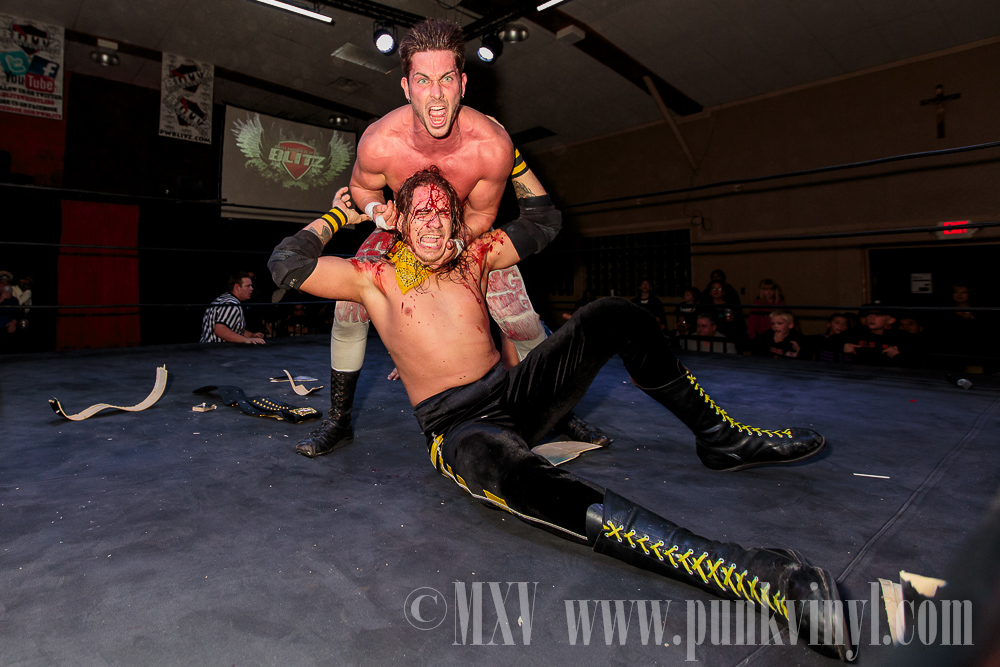 Saturday night, Pro Wrestling Blitz held their monthly event at St. Joseph Park in Joliet titled Hallowcade. This was a big show that had a good card and featured an appearance by Bad Ass Billy Gunn (aka: Mr. Ass). It also saw the return of a monster who had been absent for months, a costume contest, and a lot more.

First up was Justin Reno vs. Machine. Machine had been absent for a few months and he came back with a vengeance and with friends. The Ringmaster came to the ring with him and announced that Machine was one of the three rings (along with Grinn and Pauly Thomaselli (now wearing a mask). The Ringmaster and the other two rings hung around outside the ring during the match and interfered when Reno was getting the upper hand which led to a quick defeat at the hands of Machine.  The match was short and sweet and did exactly what it needed to do to advance the angle of The Three Rings. It was nice to have Machine back in action as well.

In a match for the no limits championship. Buddy Roberts Jr. challenged Jimmy Rockwell. Rockwell was joined at ringside by his manager, Kujo. This match was pretty evenly matched and Roberts was really given a chance to shine and all signs was pointing to him winning the match until Rockwell tossed Roberts out of the ring and Kujo got some cheap shots in. Roberts still kept at it until Rockwell flipped out of a hold and used the ropes to roll up Roberts and get the three count which the referee was blind to. A good match that left Roberts looking like a serious contender, setting up a feud between these two and Rockwell got heat for his cheap win.

Mr. 450 took on Noriega in a singles match. These two were no strangers to each other as they have feuded with each over all around the world. Noriega had the size advantage over 450 but 450 had the speed and agility. Noriega was no slouch though and wasn’t so large that he wasn’t agile. Noriega took a more grounded approach to his offense however for the most part and tried his best to overpower 450. He was kept on his toes and more often on the mat by 450’s impressive arsenal of kicks, flips and splashes. Eventually 450 took the match to an exciting finish with a neckbreaker, moonsault and his namesake finisher – the 450 splash from the top rope much to the fans’ delight. These guys put on a very tight, solid match that was one of the highlights of the evening.

Billy Whack and Chazz Moretti came to the ring with Tony Scarpone to plead their respective cases for the fans to vote for them to be the new Blitz commissioner. Whack was the entertaining heel while Moretti was more the all-business type and Scarpone clearly was in favor of Chazz who he accidentally let slip was his cousin. When Whack and Moretti left, Blitz champion Ryan Slade and his manager, Rinaldo Piven came to the ring and Piven got the crowd all riled up saying how he and Slade run Blitz, cut down Ruff Crossing (who Slade has been dodging since almost losing the title to him two months ago), and eventually talked enough trash to Scarpone that it led to an impromptu title match between the two. Scarpone got in a lot of nice offense including some big charges to Slade while he was in the corner but Slade wiggled out of a vertical suplex and scored a cheap win. He then grabbed his Canadian flag and broke the wooden pole over Scarpone’s back and laid him out. Ruff Crossing came to the ring and attacked Slade in part to save Scarpone and in part to get another piece of Slade and settle some unfinished business. Ruff came in the ring shot out of a cannon and was tossing Slade around and getting some good licks in before Slade got behind him and nailed him with a low blow. Slade then grabbed Mr. Ricolo’s (Blitz ring announcer who was dressed up as Elvis “Mr. Presolo” for Halloween) guitar and smashed it over Ruff Crossing’s head which not only knocked him out but busted him wide open. Slade taunted Ruff as he beat on his bleeding head and flashed the title belt in front of his face saying he’ll never get it.  This angle not only nicely set up a feud between Scarpone but it just made the Slade/Ruff Crossing feud that much hotter and the fans clearly cant’ wait to see Ruff get revenge on Slade.

After a brief intermission and a costume contest the in-ring action continued with a tag-team match pitting Ashton Vuitton and Matt Horning vs. Grinn and Pauly Thomaselli (aka: the other two rings). Machine and The Ringmaster were at ringside as well. This was a pretty quick-paced match and Ashton got in a lot of offense for his team and they kept the heels at bay for a good portion of the match. Ashton/Horning eventually lost out to the numbers game when Ringmaster and Machine helped the heel team cheat their way to victory and a post-match beating of Ashton and Horning. This match helped cement the Three Rings as a heel force to be reckoned with and they will be causing havoc for many in the future.

The next bout was supposed to be a tag match featuring Ruff Crossing/Hardcore Craig vs. Matty Starr and Zach Thompson. A medic came to ringside and declared that he can not clear Ruff Crossing to wrestle after the injury he sustained earlier at the hands of Ryan Slade. Starr and Thompson were giddy with the thought of having a free win awarded to them without having to work for it until Craig said he’d take them on in a handicap match. The two spent the first part of the match double-teaming Craig but he eventually made a comeback until being cut off by more double-teaming. Ruff Crossing came in and made a save and kicked a little ass before being distracted by Ryan Slade again who popped out of the curtain and he left to go hunt him down. It wasn’t enough to help Craig win however and he lost the match.

In the main event, Bad Ass Billy Gunn took on Jay Bradley. Gunn came out and talked to the crowd for a bit and since he didn’t have his long-time partner the Road Dogg with him to do his intro, a member of the audience volunteered to do the honors and claimed he could do a good job. Billy was reluctant at first but when he gave up the mic to the guy, he totally nailed it! This got a big pop from the crowd and Billy admitted he did a good job then delivered his trademark “and if you’re not down with that…” catchphrase. The crowd loved it and it was a lot of fun. Bradley got a mic and got quick heel heat by cutting down Billy and the crowd and they hated him for it. Bradley is a natural heel and a damn good one at that. He also backs it up in the ring as he’s one of the top unsigned wrestlers anywhere. The two guys put on a very entertaining match that saw Bradley beating up Gunn outside the ring for a while to gain the advantage and Billy making a bit of a comeback before getting cut off again. Some nice trading of blows and reversals led to Bradley going for his Boomstick lariat and Gunn countering it which led to his “Fameasser” finish which got a huge round of applause. He won the match and then thanked the crowd afterwords and the crowd went home happy that one of their favorites won the main event after a very entertaining night of wrestling.

Hallowcade really upped the bar of quality for Pro Wrestling Blitz and they have a lot of interesting angles ahead that either started or was built upon at this show which was fun for the entire family.