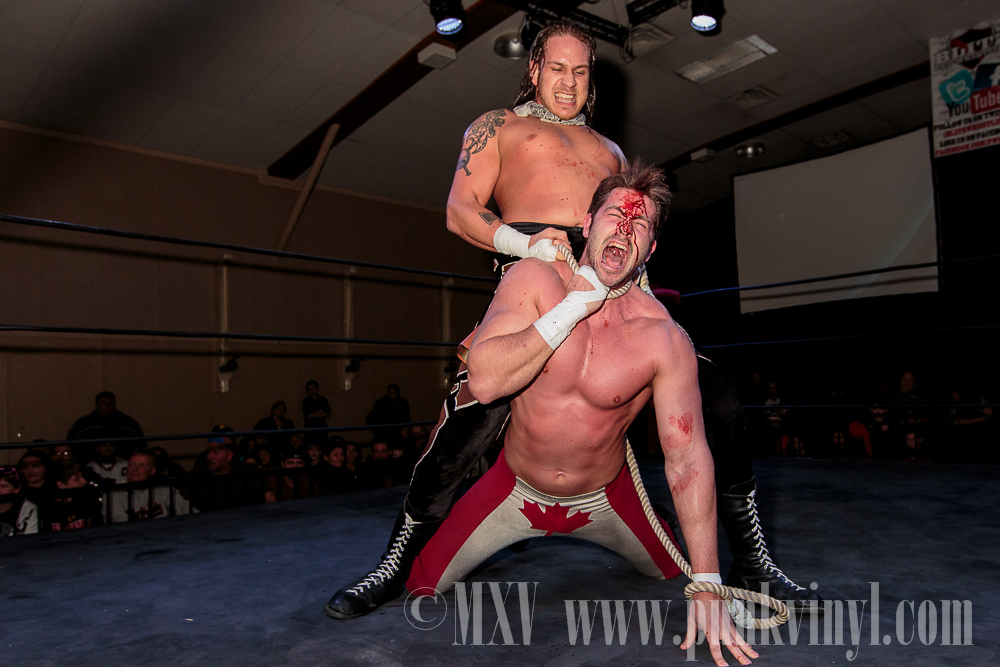 Pro Wrestling Blitz started of the new year with a real bang. Not only did their first show of the year feature a bull rope match for the heavyweight title, and not only did they have some new wrestlers debut, but they also brought in a true legend in Jake the Snake Roberts. As you could expect all these ingredients resulted in a packed house and three hours of good wrestling.

First up was Jimmy Rockwell defending his No Limits title against Noriega Noticeably absent was Jimmy’s manager, Kujo, who Jimmy informed the crowd was fired and now Jimmy was flying solo. With no manager to help him cheat to win, Jimmy had to actually rely on his in-ring talent to try to keep his title. Try he did but Noriega was besting him at every turn and getting the approval of the crowd while doing so. A frustrated Rockwell left the ring and walked to the back and purposely lost the match by count out which meant that he still retains his belt. It’s looking like the only way anyone is going to possibly take that belt off of him is if they get him in a cage match.

Matty Starr (with Rinaldo Piven in his corner) took on Clancy in the second bout. Matty and Piven came dancing and prancing out to the ring and acted ridiculous which was very amusing. Matty also instantly got heat with the crowd who were heckling him almost non-stop. Clancy gave a good fight and looked strong but Matty along with some interference from Piven was able to best him and finish him off with his piledriver. If it wasn’t for the interference of Piven, the match may have gone the other way.

The third match was a six man tag match pitting Buddy Roberts Jr./Mike Horning/Willie against the 3 Rings. Willie and Grin started the match against each other with Willie taking the early lead. Grin tagged in Machine who helped even up the odds and from there it was a lot of double and triple teaming from the Rings. Buddy Roberts and Mike Horning took a good amount of the beating and eventually the referee lost control of the match for a bit with all six men beating the crap out of each other. This melee gave Judas a chance to grab his skull on the chain and knock Buddy out with it when the referee was trying to restore order and he was able to pin the unconscious Roberts to win the match.

Blitz commissioner Chazz Moretti came to the ring and presented Mr. 450 with a medal for winning the King of Joliet tournament.  Usually kings wear crowns but not in this case. The celebration was short-lived as Zach Thompson and Rinaldo Piven came to the ring to protest the ceremony as they felt that Zach (previous King of Joliet) should still be king. This led to the two having a match. The action was fast and furious. 450 hit a lot of his high-flying staples and brought some new moves to this match including a great back breaker. Zach was no slouch either but was on the defense more than the offense. Not one to sit back and watch his client lose, Piven interfered which gave Zach an opening to hit 450 with his finisher and steal a win. Jimmy Rockwell also came out to the ring for some reason and it looked like there was going to be a post-match gang beat down on 450 until Jake the Snake Roberts came to the ring to break it up. Jake got on the mic and was surrounded. He tried to talk some sense into the heels but they weren’t having it so he DDT’d Zach and then 450 DDT’d Rockwell. Piven ran out of the ring and got Rockwell out of there too but was unable to get to Zach in time to save him from what would come next. Jake and 450 grabbed the bag containing Damien and opened it up and dumped him on top of Zach. It slithered around him for a bit until Jake picked him up and waved him around. He went to go place him back on Zach who came to at this point, saw what was coming and got the hell out of dodge. The crowd loved every minute of it. After Zach left, Jake gave a heartfelt speech talking about how blessed he was to be clean and been given a second chance and told the fans how truly touched he was that he has received so much support from them recently. It was a feel good moment to see this legend of wrestling overcome his personal demons and back in the ring looking better than he has in years.

After the intermission, Matty Starr and Rinaldo Piven came out and said they had someone who was going to try to collect the $10,000 bounty they put on Hardcore Craig’s head. A very tall guy named Sterling came to the ring and tried his best to take Craig out. Craig was all business and gave the guy the fight of his life. Sterling put up a good fight but was never able to keep Craig down for long and Craig did what he does best and that was deliver an ass kicking. After the match Craig threw down a couple of celebratory beers with the crowd.

Jay Bradley came to the ring and talked about how he was now a big TV star, he ripped on the crowd and on Joliet and then called out Ashton Vuitton to answer his challenge. Jay ripped into Ashton too and then the two started fighting. Jay was sporting a damaged hand and Ashton’s shoulder still wasn’t healed fully so the two both had taped up targets for the other to focus attacking. Ashton started the match on fire going after Jays’ hand and arm and got the upper hand early. The extremely tough Bradley kept fighting back though but his offense often ended up aggravating his injury and slowing him back down. The frustrated Bradley went for a cheap win by rolling up Ashton and grabbing a handful of trunks to keep him down for the three count (and fully exposing Ashton’s ass in the process). The referee didn’t see it and counted three but Chazz Moretti came out to ringside and demanded that the match be restarted. This infuriated Bradley even more who turned his anger into energy to attack Ashton more viciously. Ashton didn’t let up and was determined to overcome Bradley which he did with a surprise roll up for a pinfall. Bradley was so pissed off he grabbed a mic and unloaded on the crowd and Mr. Ricolo some more before leaving the ring as the fans chanted for his departure.

In a tag match, If Looks Can Kill fought Cambridge/Cutler. This match had a lot of double team action with Cambridge/Cutler being the babyface team. The action really picked up in the second half of the match with a lot of big moves and Cambridge and one of the looks knocking heads hard and busting each other open the hard way on accident. They keep going though and the match concluded with a double finisher from If Looks Can Kill.

The fans were very excited for the main event which was a rematch between Ryan Slade (now the challenger) and Ruff Crossing for the Blitz title. Slade (with Rinaldo Piven) was still furious that he lost his title to Ruff and was determined to get it back. This wasn’t any ordinary match though, this was a bull rope match. The two men had a rope tied to their wrists with a cowbell hanging from it in the center of the rope. This meant that not only were the two men bound together and not able to run away from the other, but it also meant the rope (and bell) could be used as a weapon. The match started with a flurry of punches from Ruff who then grabbed the bell from the rope and hit Slade in the head with it a couple of times which busted him wide open. Slade was wearing a crimson mask for the rest of the match and the site of his own blood seemed to kick him into high gear because after Ruff tried choking him out and he was able to catch his breath, Slade started wailing on Ruff and giving him everything he had and then some.  Ruff didn’t stay down for long and fought back hard which led to a nicely paced series of reversals and near falls. Both men came at each other with everything they had and the finish came where Ruff tried to tombstone Slade, who reversed it, only to be reversed himself which gave Ruff the victory. It was a cool finish but Ruff had no time to celebrate as The 3 Rings came to the ring and started beating him down and then tied the rope around his neck and hung him over the top rope. Ruff was gasping and clawing for air to try and escape and luckily Clancy, Mr. 450, Mike Horning and Buddy Roberts Jr. came to make the save make the save which capped off a show that was stacked with enjoyable matches from start to finish and easily one of the best Blitz shows over the course of the last few months.